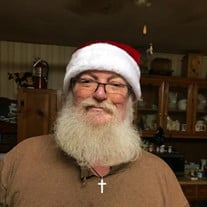 Willy Eugene Nulisch, 57, of Stafford, Texas passed away on June 17, 2022. He was born on December 14, 1964 in Sugar Land, Texas to Clarence Robert Nulisch, Sr. and Edith Lucille Sanders Nulisch. His hobbies included fishing and spending time with his family. This loving husband, father, brother and friend will be missed. In addition to his parents, Willy is preceded in death by a sister, Brenda Nulisch and a brother, Clarence Robert Nulisch, Jr. Survivors include his loving wife of nearly 33 years, Aurora Guzman Nulisch; son, Mark Nulisch (Kacie Christensen), brothers, Billy Wayne Nulisch and James Mitchell Nulisch (Carmen Guzman); along with extended family and friends. Visitation will be held from 5:00 p.m. – 7:00 p.m., Thursday, June 23, 2022 in the Chapel of Davis-Greenlawn Funeral Home in Rosenberg. The funeral service will be held at 10:00 a.m., Friday, June 24, 2022 in the Chapel of Davis-Greenlawn Funeral Home in Rosenberg with burial at Greenlawn Memorial Park. Tributes and words of condolence may be left for the family at www.davisgreenlawnfh.com. Arrangements are under the direction of Davis-Greenlawn Funeral Home, 3900 B.F. Terry Blvd. (Hwy 59 South @ FM 2218), Rosenberg, Texas 77471, Phone: 281-341-8800.

The family of Willy Eugene Nulisch created this Life Tributes page to make it easy to share your memories.

Willy Eugene Nulisch, 57, of Stafford, Texas passed away on June...

Send flowers to the Nulisch family.