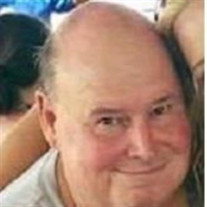 William Earl Pingelton, age 68, passed away on Friday, October 9, 2020 in Richmond, of a massive heart attack. William was born on February 27, 1952 to the late Johnny and Shirley Pingelton. William married Debra Pingelton on October 29, 1971 which would have made 49 years in marriage. William loved to cook and entertain his family. William was the sweetest man and would help anyone in need. William Earl Pingelton is survived by his wife, Debra, son and daughter in law, Jason and Jodi Pingelton , daughter and son in law, Lesley and Edwin Vaught, grandchildren, Hannah, Zachary, Chase, Allison, and Hunter, sister and brother in law, Cindy and Johnny Trejo, sister and brother in law, Nancy and Roger Anderson, and sister in law, Margaret Pingelton. William is also survived by many nieces and nephews, friends and family. He is preceded in death by his little brother, John Pingelton. He will be greatly missed by all who knew him. Memorial services will be held Friday, October 16, 2020 at 2:00 P.M. in the Chapel at Davis Greenlawn Funeral Home. The family will receive friends starting at 1:00 P.M. on Friday until service time.

The family of William Earl Pingelton created this Life Tributes page to make it easy to share your memories.

Send flowers to the Pingelton family.