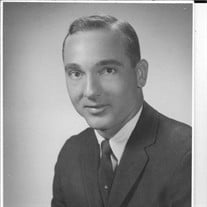 William (Bill) Arnold Meitzen died surrounded by family on Friday, April 22, 2022 in Richmond. Bill was born to Lillie Mae Carson Meitzen and Ernest Richard Meitzen, Sr. September 28, 1937, in Lake City, Florida. Bill's family moved to Dickinson in 1942. His father died when he was a child. His mother taught piano and took in washing and ironing to support the family. Wanting to help his mother, Bill, being all of 11, started shining shoes in beer joints and barber shops. Later he delivered the Houston Post on his bicycle. He also worked on a dairy farm where he got free real milk that his mother made into butter and clabber. In the summers he worked on the hay fields around the area. When Bill was in the 9th grade he was a member of the 4H Club. He won a calf in the calf scramble at the Galveston County fair and raised the calf in areas around town. His calf tied for first place at the county fair. Bill graduated from Dickinson High School and the University of Texas. He served in the United States Marine Corps and then graduated from the University of Texas School of Law. Bill lived in Rosenberg and Richmond and practiced law in Fort Bend County for over 50 years. During that time, he served the county as District Attorney for multiple terms. Bill did not retire until he got 'hit' with cancer and a couple of strokes. Only then he decided it was time to take down his shingle. He was an accomplished musician and enjoyed classical music. He sang with many different choirs in the area, including his church, Richmond Mount Vernon Methodist Church. He leaves his wife, Agatha Janis Billups Meitzen, his daughter Amanda Marie Meitzen Lacour of Dallas, and son John Joseph Meitzen of Del Valle . He is also survived by his brother John Edward Meitzen and wife Mary Belle of Port Lavaca, and sister Jo Lou Gaupp and husband Peter of Arlington. He has four grandchildren, nieces and nephews, and his family also includes his wife's. Bill is predeceased by his parents, sister Carson Lillie Flak and husband Henry, brother Ernest Richard Meitzen, Jr. and his sister-in-law Joyce T. Clark. Services held Friday, April 29 at his church and at Forest Park East Cemetery in Webster under direction of Davis-Greenlawn Funeral Home, Rosenberg. Pallbearers will be Dominic Hernandez, David Lites, Deagan Lites and Sean Billups.

The family of William Arnold Meitzen created this Life Tributes page to make it easy to share your memories.

Send flowers to the Meitzen family.