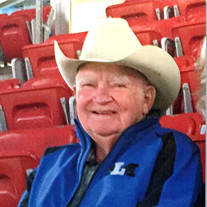 William Hartlage Jr., a straight-talking, highly respected cattleman known throughout Texas, died Monday, Aug. 17 after a valiant fight against COVID- 19. He was 86. “Junior,” as his friends call him, was a cowboy to the core. He lived his entire life in Fort Bend County, where his family planted deep roots as farmers and ranchers after immigrating from Germany and settling here in 1894. Junior was born Jan. 28, 1934, to William F. “Will” Hartlage and Ivy Mae Hartlage, in a small wood-frame house on the family farm in the historic Foster Community. The youngest of six, Junior’s love for cattle and horses came naturally. From the time he could sit a horse, he recalled working cattle alongside his father. In a 2003 interview with the Fort Bend Herald-Coaster, Junior shared memories of long cattle drives, moving cattle from one pasture to the next, with a brief stop at a country store. “We’d get a nickel soda water, some cheese and crackers and some summer sausage and then keep going,” he said. He recalled seeing his father work in the family’s vegetable garden as he did his morning chores of milking cows, feeding chickens, hogs and other animals and later, mixing feed for the cattle. His mother cooked their meals on a wood stove. Like most other country kids, he swam in nearby Jones Creek, hunted ducks and doves, but mostly tended livestock on the family’s working cattle ranch. In 1950, at age 16, he showed the Grand Champion Steer in the Fort Bend County Fair. Because of flooding that cancelled the auction that year, he had to wait several months to collect his $1,000 check. He walked to school as a kid, and later attended elementary school in Richmond, and high schools in Richmond and Rosenberg and then Lamar Consolidated when the twin cities combined their school districts. He enjoyed weekend roping events, where he earned extra money from breakaway and tie-down contests on his favorite mare, Old Gray. As a teenager, Junior was running his own small cow-calf operation and hauling neighbors’ cattle to local meat markets and stockyards in Houston. There, his strong work ethic and keen eye for cattle caught the attention of two men who founded the Farm and Ranch Commission Company. They hired him and thus began a 66-year career of work in stock yards throughout Southeast Texas, including Port City Stockyards in Houston and Sealy. Ranchers all over the state called on Junior to help them buy top cattle to build their own herds. He helped many youngsters in 4-H and FFA choose show calves for the fair, just as he did as a teenager. He was always quick to lend a hand when needed. Like most cowboys and cattlemen, he was a modest man of few words. But his confident nod and the flick of his wrist at a cattle auction spoke volumes. His peers and his favorite nephew and best friend, Tommy Holmes, say Junior’s ability to read cattle -- and most people -- was unmatched, along with his values of honesty, integrity and hard work. In the final weeks of his life, at age 86, he was still going strong, pulling a trailer six days a week to different stockyards from Flatonia, El Campo, Wharton, Brenham and sometimes Navasota, buying and hauling cattle for himself and his customers. And, he was still employed as an order buyer for a packing plant. "Ranching is something that's in your blood," he once told the Fort Bend Herald-Coaster reporter as she profiled him as a living legend of the real working cowboy. Junior said he loved his life and wouldn’t trade it for anything. We wouldn’t trade anything for having Junior in our lives. Junior Hartlage is survived by his wife of 45 years, Charlotte; daughter Robin McQueen and husband Gary McQueen of Cedar Creek, Tx., sons Carson Hartlage and wife, Cindy, of Beasley, Tx., and Michael Hartlage of El Paso, Tx., stepson Rex Becker and wife, Diane, of Richmond, and nephew and best friend, Tommy Holmes and his wife, Debbie, of Beasley, Tx.; grandchildren, Matthew, Joel and Natalie McKee, Abby Kettler, Katie Sabrsula, Will Hartlage, Christina McCormick, Andrea Wilkerson, and Jacob and Rachael Becker; nieces: Melissa Iturria, of Grapevine, Tx. and Cathey Holmes, of Rosenberg, nephews David Holmes, of Austin, Tx. And John Carhart, Seguin, Tx., and six great grandchildren. He was preceded in death by sisters: Vera Carhart, Lenora Holmes, Eva Sims, Janet “Jennie Belle” Richter; a brother, Edwin Hartlage, and nephew Wyatt Holmes. Funeral services are scheduled for Monday, Aug. 24, at Davis-Greenlawn Funeral Chapel in Rosenberg. Visitation at 9:00 a.m. with service at 10:30 a.m. (Limited to 100 attendees & masks are mandatory). Pallbearers include Matthew McKee, Joel McKee, Will Hartlage, Greg Holmes, Matt Gore, and Jacob Becker. In lieu of flowers, memorial contributions can be made to the Alzheimer’s Foundation of America (www.alzfdn.org) or the Bluebonnet Equine Humane Society (www.bluebonnetequine.org). Condolences to the family may be shared online by visiting www.davisgreenlawnfh.com or by mail: 159 Union Chapel Rd., Cedar Creek, Tx. 78612 Arrangements are under the direction of Davis-Greenlawn Funeral Home, 3900 B.F. Terry Blvd., Rosenberg, Texas 77471, Phone: 281-341-8800.

William Hartlage Jr., a straight-talking, highly respected cattleman known throughout Texas, died Monday, Aug. 17 after a valiant fight against COVID- 19. He was 86. &#8220;Junior,&#8221; as his friends call him, was a cowboy to the core.... View Obituary & Service Information

The family of William Hartlage Jr. created this Life Tributes page to make it easy to share your memories.