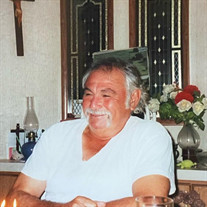 William “Willie” Gonzales Sr of Rosenberg, Texas passed away on June 9, 2022 with his family by his side. He was born on July 1, 1942 in Midfield, Texas to Cesario “Mike” and Amelia Gonzales. Willie is preceded in death by his parents, siblings Paul, Albert, and Lucy along with grandson Shane Meyer. He is survived by his loving wife Aurora Belmares Gonzales, children Carla Meyer Gonzales, Donna Gonzales, Ellen “Tiny” Gonzales, Willie “Weedee” Gonzales Jr, Eric (Tammy) Gonzales, Nani (Sean) Sevy, Lizzie Perkins, Ronnie (Will) Malone, twins Jo Anna (Grant) Gonsoulin and Joel (Michelle) Gonzales; 17 grandchildren along with 11 great grandchildren; sister Helen Gonzales along with nieces and nephews. He was a husband, father, great grandfather, and his most cherished role was a grandfather to his precious grandbabies. Willie was a sweet soul that saw a friend in any stranger he met, to know him was to love him. Willie loved going to work and running heavy equipment for J.N. Mc Donald for 40+ years. Pallbearers are Willie “Weedee” Gonzales Jr, Sean Sevy, William “Will” Malone II, Joel Gonzales, Blake Dobesh, Gerald Bell. Honorary pallbearers Grant Gonsoulin, Thomas Perkins, William Malone III and Colton Gonzales. The visitation is scheduled for noon on June 16, with the Rosary starting at 1:30 pm, funeral following at 2 pm at Davis-Greenlawn Funeral in Rosenberg, TX; reception to follow at The Village of Pleak Hall, 1621 FM 2218 South, Richmond, TX 77469. The family would like to extend their heartfelt appreciation to everyone who has reached out to them in this difficult time. He will be missed by many

The family of William Gonzales created this Life Tributes page to make it easy to share your memories.

Send flowers to the Gonzales family.