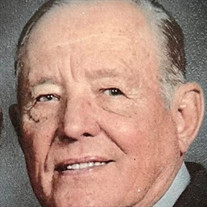 Wilburn Henry Kramer, Sr., also known as “Doc” and “Preacher”, died on May 16, 2022, in Richmond, Texas, at the age of 89. Wilburn was born on February 10, 1933, in Needville, Texas, to Selma (Hedt) Kramer and Gus Kramer. In 1955, he married the love of his life, Antonia (Tonie) Novak Kramer. Wilburn is survived by his wife of 66 years, Tonie Kramer, his sons, Michael Kramer and wife, Patricia; Wilburn (Tooty) Kramer, Jr. and wife, Rhonda; and his daughter, Rosemary Moeckel and husband, Robert, and Andy who he loved and accepted as a son. He is also survived by his grandchildren: Kyle Kramer and wife, Brooke, Krystle Randle and husband, Gayland; Robin Brenk and husband Eric, Jonathan Kramer, Ryan Moeckel and wife, Kirstyn, Mikayla Kinchen and husband, Dillon; and Madelyn Kramer and friend, Josh Lagas. He is also survived by his great-grandchildren: Hannah, Katelyn, Ethan, Rylee, Madison, Philip, Benjamin, Bentley, Beau and Jayden; along with many in-laws, friends, nieces and nephews. Wilburn was preceded in death by his parents, his infant son, Mark; his brother Elton Kramer and sister, Anita Zwahr Wilburn was a life-long member of Immanuel Evangelical Church. The family will be receiving guests for visitation on Friday, May 20, 2022, at 2pm at Immanuel Evangelical Church at 9018 Church St, Needville, Texas 77461. The funeral will follow at 3 pm. The burial being at Davis Greenlawn Cemetery. In lieu of flowers, donations may be made to Immanuel Evangelical Church. Tributes and words of condolence may be left for the family at www.davisgreenlawnfh.com. Arrangements are under the direction of Davis-Greenlawn Funeral Home, 3900 B.F. Terry Blvd. (Hwy 59 South @ FM 2218), Rosenberg, Texas 77471, Phone: 281-341-8800.