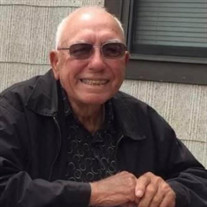 Wayburn J. Hall, Sr., a member of The Greatest Generation, passed away in Richmond, TX. on August 3, 2021, at the age of 96. Born in Gandy, Louisiana on May 9, 1925, to Isaac and Nettie Hall, Wayburn moved to Sugar Land with his parents and six sisters when he was a boy. After graduating from Sugar Land High School in 1943, Wayburn enlisted in The United States Marine Corps. He landed on the Island of Peleliu on September 15, 1944, where he was wounded in battle and received The Purple Heart as well as a unit citation. On April 1, 1945, the First Marine Division landed on Okinawa where Wayburn turned 20 years old. When the War concluded in the Pacific, the Division was sent to North China to “police” hostilities still in existence between the Chinese and Japanese. In 2013, Wayburn’s wartime experiences were captured in Adam Makos’ book Voices of the Pacific: Untold Stories from the Marine Heroes of World War II. After his honorable discharge from the service in January 1946, Wayburn returned to Sugar Land where he lived until 1995. During these early years, Wayburn dated and married Louise. Together the two eventually had four sons. He worked for Sugar Land Industries for some years and eventually bought the Exxon station on Brooks Street. His good common sense and a keen awareness to customer service served him and his business well. He ended up owning several other service stations through the 1970’s and 80’s. In 1961-62 Wayburn managed the Sugar Land Lions Little League baseball team. Along with Mr. Charles Kelly they led the Lions to a pennant winning season. He was then named the manager of the Ft. Bend All-Stars. Wayburn was a member of the Baptist Church, the Masonic Lodge, OES, and was a Municipal Court Judge in Sugar Land. In 1995, Wayburn and Louise moved to Easterly Texas, where he lived out his years as a cattleman, member of the Franklin Lodge, and Order of the Eastern Star with Louise. He was preceded in death by his wife, Louise, and grandson Tyler Chadwick Hall. He is survived by four sons and daughters-in-law, nine grandchildren, seven great grandchildren, and is the last surviving member of that Hall family that moved to Texas in the 1930’s.

Wayburn J. Hall, Sr., a member of The Greatest Generation, passed away in Richmond, TX. on August 3, 2021, at the age of 96. Born in Gandy, Louisiana on May 9, 1925, to Isaac and Nettie Hall, Wayburn moved to Sugar Land with his parents and... View Obituary & Service Information

The family of Wayburn J. Hall, Sr. created this Life Tributes page to make it easy to share your memories.