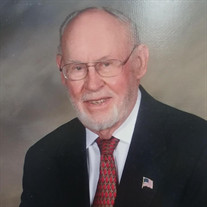 Victor James Zdunkewicz of Weston Lakes, Texas left this world to be with our Lord and Savior Jesus Christ, on August 28, 2021. Born on August 12, 1930 to Louis and Rosie Krolczyk Zdunkewicz, Vic was a life-long resident of Fort Bend County, having been born and raised in Rosenberg. He was preceded in death by his parents and brothers Sylvester, Daniel and Thomas, and sister Dorothy Zdunkewicz Bennett. Vic served in the United States Navy during the Korean Conflict, stationed in Iceland where he kept a watchful eye on the Soviet Union’s naval activities in the North Atlantic. After returning home and marrying the love of his life, Mary Rose Todd, they made their home in Rosenberg. He began his career as a postal carrier and then became general manager for Joseph Polichino, the local distributor for Jax and Schlitz beer. After some years, Vic and his partners, Marvin Horelica and Otto Hrncir bought the beer business from Polichino and grew the distributorship through the 60’s, 70’s and 80’s until its’ sale in 1985. He was an active real estate investor and developer in various areas of Texas for many years. Vic was a leader in the local community and a long-time parishioner of Holy Rosary Catholic Church in Rosenberg. Over the years he contributed his time and resources to support the Fort Bend County Fair, the Rosenberg-Richmond Chamber of Commerce, Weston Lakes Utility District, and other civic activities. A devout Catholic, Vic was a member of the Knights of Columbus for over 60 years, where he served as Faithful Navigator in the early 1970’s. The Color Corps of the Knights were decorated for their drill precision during Vic’s time as leader of the 4th Degree Knights. Vic loved being with family and friends. An avid outdoorsman for most of his life, Vic enjoyed hunting, fishing and gardening. The father of two boys, Richard and David, Vic along with Mary Rose, would spend fall weekends at the ranch in the Hill Country pursuing that trophy buck or a covey of quail. Vic would “adopt” many of his son’s friends as second sons. He always talked fondly of his experiences with Richard and David, and their friends Michael Joseph, John Grillo, Robert Beck, Willie Wood and other college buddies on the ranch or skiing in Colorado. Vic and Mary Rose were very close to nephews Gary Zdunkewicz, and wife Cindy, and Robert Bennett and his wife Sylvia. They, along with Susan Kettler Baudoin would frequently stop by the house in Weston Lakes or phone Vic and Mary Rose, to keep tabs on them. Vic was a serious domino player, and along with his long-time friend, Charlie Kettler, won the mythical “Texas Straight Domino Championship” in the 70’s. There were many evenings at the deer camp with Mike Krolczyk, Alton Pesek and others, where dominoes was the focus rather than the deer hunting. Vic and Mary Rose would also play canasta on Monday evenings with their long-time friends, Joe and Mary Ellen Grillo. Those evenings were filled with laughter and good times. In his retirement, as a grandfather, he showered his grandchildren, Nancy, Todd, Laura and Annie with love and attention, always asking them to “hug my neck.” G’Dad, as he was known to them, enjoyed spoiling them and playing games, building a fabulous doll house, throwing a ball, fishing in Weston Lakes, hitting a golf ball or watching them ride around the neighborhood in a toy car. His lifelong appreciation of music provided him much enjoyment and comfort. He loved a wide range of styles – from classical to vocals; favorites included Mozart, Tchaikovsky and Montovani. He loved to listen to the light-hearted “Whiffenpoof Song” by Fred Waring, but he and Mary Rose’s most beloved song was “Somewhere in Time” composed by John Barry for the 1987 movie. Vic is survived by his wife of 65 years, Mary Rose and sons, Richard and his wife, Catherine, David and his wife, Diane, grandchildren Nancy, Todd and his wife Jamie, Laura and her fiancé Grant, and Annie. The family wishes to express its gratitude to the many doctors, Aegis Senior Care Group and caregivers that helped Vic and Mary Rose through the last years of his life as he battled Parkinson’s Disease. Special thanks to Beverly Bungue and Damien Nwosu who was a true blessing providing Vic comfort and support. Mass will be celebrated at 10:30 AM on September 1st at St. Faustina Catholic Church, 28102 FM 1093 in Fulshear with the Rev. Dat Hoang officiating. Serving as pallbearers are Robert Machen, Daniel Riley, Steve Utterback, L. A. Meyers, Bob Pfaffenberger and Wayne Kotzur. In lieu of flowers, the family requests that contributions be made to St. Faustina Catholic Church, 28102 FM 1093, Fulshear, Texas 77441 or charity of your choice.

Victor James Zdunkewicz of Weston Lakes, Texas left this world to be with our Lord and Savior Jesus Christ, on August 28, 2021. Born on August 12, 1930 to Louis and Rosie Krolczyk Zdunkewicz, Vic was a life-long resident of Fort Bend County,... View Obituary & Service Information

The family of Victor J. Zdunkewicz created this Life Tributes page to make it easy to share your memories.

Send flowers to the Zdunkewicz family.