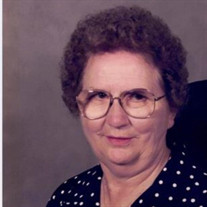 Vallie Mattie Christ Urbanek, 91 passed away peacefully June 2, 2021 at Reliable Oaks Memory Care in Needville, Texas. She was born April 3, 1930 to Ella Mesecke Christ and Fritz Christ. Vallie grew up around Needville working on the farm with her parents and 6 other siblings. She knew the meaning of hard work as she had to take care of the younger siblings and hoe and pick cotton by hand. She graduated from Lamar High School in 1948 and married Albert Urbanek, Sr on November 6, 1948. They both had jobs and farmed on the side. Vallie worked for Southwestern Bell Telephone Company in the Rosenberg office as a switch board operator and eventually became chief operator of the office until the office closed in the mid 70’s. She worked in the plant department after that and took early retirement. In 1981, she and her husband opened up Urbanek’s Store in Needville and managed it until 2004. In her retirement when she wasn’t taking care of the store, she would run the cotton picker and module builder on the farm. She enjoyed planting and harvesting her garden and would share all her fresh vegetables with family and friends. She was famous for her homemade rolls every holiday get-together. She enjoyed teaching her grandchildren how to stock shelves at the store, work the garden, shell peas, and can pickles. Vallie’s faith in God was strong and she was a member of St. Michael’s Catholic Church in Needville. She is survived by her son Albert Urbanek, Jr and his wife, Annette of Fairchilds along with their children Alyssa Urbanek of Stephenville; Albert (Bert) Urbanek III of Needville; her son Bryntin Urbanek, Sr and his wife, Amy of Needville; their children Bryntin Urbanek Jr and wife Ally, with their children Everleigh and Tinsley of Needville; Makayla Parr and husband Lane of Wallis along with Layton Parr to be born in October; and Brianna Urbanek of Needville, sister Lovalee Horak of Old Ocean, and brother Allen Christ of Rosenberg, and numerous nieces, nephews, great nieces and great nephews. She is preceded in death by her parents and husband Albert; infant sister Elnora, sister Nolee Koebelen; brothers Herman, Richard, & Pete Christ. Sisters-in- law Bernice Christ, Evelyn Christ, Nancy Christ, Mildred Urbanek, Albina Roehe, and Helen Heinecke. Brothers- in-law O. A. Kobelen, L. J. Horak, Frank Urbanek, Sr., Arthur Roehe, Jessie Heinecke, and Otto Urbanek. The family wants to thank the staff at Reliable Oaks Memory Care and Windsor Hospice Services for the great care and support that she was given during her stay there. Visitation will be Tuesday, June 8, from 4-8, with Rosary at 7 pm at Davis Greenlawn Funeral Home, Rosenberg. A funeral Mass will be held at 10:00 am Wednesday, June 9 at St. Michael’s Catholic Church in Needville. Pall bearers will be Albert (Bert) Urbanek, III; Bryntin (BJ) Urbanek, Jr.; Bobby Christ; Randy Heinecke; Ronald Urbanek; and Keith Urbanek. For those wishing, memorial donations may be made to St. Michael’s Catholic Church or any organization of your choice.

The family of Vallie Mattie Urbanek created this Life Tributes page to make it easy to share your memories.

Send flowers to the Urbanek family.