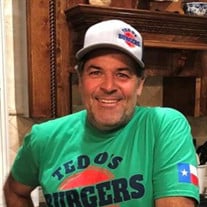 Theodore Joseph “Ted” Brown, 50, passed away Saturday, April 3, 2021. He was born May 24, 1970 in Petoskey, Michigan to Charles Walter Brown and Sandra Jean Swanson Sienicki. Ted was a member of Faith United Methodist Church and served his country in the U.S. Air Force. Survivors include his wife of 24 years, Kristen Elizabeth Denney Brown, 2 children, Claire and Blake Brown, sister, Brigitte Mangione, and husband Tom, nephew Trent Frost along with a host of other loving family members and friends. Ted was always looking for his next adventure. From flying high in C130’s in the Airforce, hitchhiking to Alaska to work on a Salmon boat, or deciding to leave his 20-year Oil & Gas career to live out his dream of cooking as a profession. Ted was always planning the next trip and wanted all his friends and family to join him. His only problem was finding a RV big enough to hold them. What Ted cherished most was family. Ted and Kristen attended Junior High and High School together but did not realize they were soul mates until paths crossed again after Ted left the Airforce in 1996. They fell head over heels in love with each other and got engaged after only 2 weeks of dating-and married less than 6 months later. When you know, YOU KNOW! Ted brought Kristen into his world of adventure which initially tested her comfort zone. Weekends were filled with BBQ cookoffs, fishing tournaments, camping trips, NASCAR races, zip-lining in Costa Rica, or roaming the streets of The Big Easy all night long with the best of friends. This only served to strengthen their love for each other and their resolve to share their lives. Kristen will always cherish the memories made. The biggest experience and the joy of their lives were the births of their 2 children (Claire and Blake). Ted treasured his children. He was so proud of them and enjoyed watching them grow. He loved coaching Blake from the stands in football and dancing with Claire and the Belles every year. He always made sure they had the best childhood possible, being tough when needed but mostly making sure they experienced all this world has to offer loving them along the way. Ted was very active in his community and belonged to many civic organizations like CCA (Coastal Conservation Association), Freemason’s, VFW as well as a member of the Risky Briskets Cookoff team where his 2nd place Chili became famous at Ted-O’s Burgers. He was always ready to donate his time and energy for any cause. A memorial service will be held at Faith United Methodist Church in Richmond, Friday, April 9, 2021, at 10:00 A.M. In lieu of flowers, please send donations to Rosenberg Masonic Lodge #881 Scholarship Fund P.O. Box 152 Rosenberg, Texas 77471

The family of Theodore Joseph Brown created this Life Tributes page to make it easy to share your memories.

Send flowers to the Brown family.