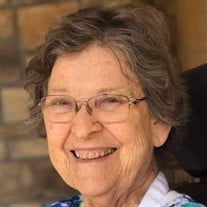 Shirley Claudine Humphries was born to Hubert and Goldie Speir in Clarendon, TX on October 18, 1935. She was blessed with 5 younger siblings that have all remained close throughout her life. She was raised in the Rio Grande valley and graduated from Edcouch Elsa High School. After high school she became a telephone operator and worked for the phone company in Odessa, TX. She soon met and married Daniel Shaffer. This union produced 4 children, 3 while they lived in Odessa, and 1 after the family moved to Casper, WY. The decade spent in Wyoming was one of the best in her life by her account. Later the family moved back to Texas and settled in Sugarland for the remainder of Dan’s career and retirement. Shirley loved being a mother and all her children knew it. In addition to being a stay-at-home mother, she was an avid gardener, seamstress, and crafter. Many of her loved ones were blessed with her clothes and ceramic creations. Her love of ceramics and crafting led her to a position of activity director at a rehabilitation hospital. Many patients were blessed by her healing gift of art. Her family led to the arrival of 11 grandchildren which she made very clear were the best fruit of her life. Later, she was blessed with numerous great grandchildren. She and Daniel were married for 47 years when he passed away from a long battle with cancer. After the passing of her husband Daniel, she reconnected with her high school sweetheart, Audie Humphries. Their romance was truly magical, and many commented they acted like they were 16 again. Soon they were married and began a life of many adventures to include cruising, traveling, camping, and visiting old friends. Shirley and Audie remained in Sugarland and had just recently moved to a retirement home in Pearland, TX where they were well cared for. Their marriage endured until the time of her death. Throughout her life Shirley had a love of the Lord and her family. This was evident in everything she did. She also had a profound love of angels which she created, collected, and shared. Shirley passed from this life into the arms of her savior on August 30, 2021 while at home. She was preceded in death by her parents, first husband Daniel Shaffer, brother John Speir and his wife Linda, brother-in-law George Bland, and daughter Carolyn Smith. She is survived by her loving husband Audie Humphries, siblings, Donald Speir (Dixie), Garry Speir (Pam), Stephen Speir (Linda), and Sharon Bland, children, Michael Shaffer (Rebecca), Brenda Kinnamon, Jeffrey Shaffer (Tracy), 11 grandchildren, and 17 great grandchildren. Shirley leaves behind a legacy of faith, love and caring. She will be deeply missed. Visitation will be held at 9:00am, Wednesday, September 8, 2021, followed by a funeral service and interment at Greenlawn Memorial Park in Rosenberg, TX. The service will be live streamed and available for later viewing at Shirley Humphries Obituary - Visitation & Funeral Information (davisgreenlawnfh.com) for those who cannot attend in person. Arrangements under the direction of Davis-Greenlawn Funeral Home, 3900 B. F. Terry Blvd., Rosenberg, TX 77471, 281-341-8800. Memorials in her honor can be directed to A*MED Community Hospice 8900 Emmett F Lowry Expy Suite 102 Texas City, TX 77591

Shirley Claudine Humphries was born to Hubert and Goldie Speir in Clarendon, TX on October 18, 1935. She was blessed with 5 younger siblings that have all remained close throughout her life. She was raised in the Rio Grande valley and graduated... View Obituary & Service Information

The family of Shirley Humphries created this Life Tributes page to make it easy to share your memories.

Shirley Claudine Humphries was born to Hubert and Goldie Speir...

Send flowers to the Humphries family.