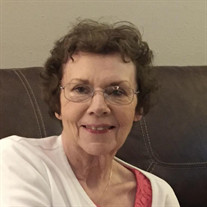 Sheila Anne (Clifford) Lawrence, 84, of Richmond, Texas passed away on June 8, 2021 in Sugar Land. She was born on March 13, 1937 in London, England. She is preceded in death by her parents, Frank and Jessie Clifford; and siblings, Sylvia... View Obituary & Service Information

The family of Sheila Anne (Clifford) Lawrence created this Life Tributes page to make it easy to share your memories.

Send flowers to the Lawrence family.