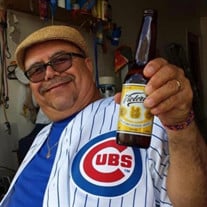 Sergio Gerardo Herrera, Sr., 66, of Houston, Texas passed away on November 19, 2021 in Sugar Land. He was born on July 27, 1955 in Matamoros, Tamaulipas, Mexico to Felipe Hernandez Herrera and Vicenta Landaverde. In addition to his parents,... View Obituary & Service Information

The family of Sergio Gerardo Herrera Sr. created this Life Tributes page to make it easy to share your memories.

Send flowers to the Herrera family.