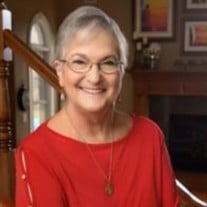 Ruth Schori Carrell, 73, of Richmond, TX peacefully passed away on November 10, 2020 in her home with her three children by her side. She gracefully battled pancreatic cancer for the last three and a half years. Ruth was born in Ketchikan, Alaska on May 2, 1947, daughter of Ward Kermit Schori and Margaret Haley Schori. After graduating in 1965 from Evanston High School, she earned her Bachelors of Arts in Psychology from Grinnell College in 1969. It was at Grinnell that she met Sam Carrell the first day on campus of their sophomore year. They were “pinned” that Christmas and were married on Easter Sunday, April 14, 1968. Ruth was preceded in death by her loving husband of 41 years, Sam Carrell, her parents Ward and Margaret Schori, her sister Ellen Boscher, and nephew David Boscher. She is survived by her daughter, Debi and husband, David Heck of Westfield, IN; son, Lt. Colonel (retired) Dr. Scott Carrell and wife, Susie, of Davis, CA; son, Colonel Richard Carrell and wife, Carmen, of Albuquerque, NM. Her six beloved grandsons Austin and Adam Heck, Zachary and Luke Carrell, Scott and Sam Carrell. Siblings, Richard M. (Katherine) Schori of Henderson, Nev., Mary M. (Jack) Dammann of Loves Park, IL., John W. (Barbara) Schori of Elgin, Ill., and Carl M. Schori of Nevada City, Calif; and numerous nieces and nephews. Early in her career, Ruth taught Head Start pre-school, Adult basic education, and ESL classes. She then found her true passion, sales. She sold radio advertising, was the admissions director at a nursing home, and sold promotional products for 18 years in the Houston area. Ruth joined the P.E.O. sisterhood in 1973 and was an active member of Chapter HU, Richmond. She served as Chapter President for two different chapters. She was a life-long Episcopalian, serving in leadership roles in several churches and has been an active member of Calvary Episcopal Church, Richmond, TX since 1998. Ruth’s family was her pride and joy. She was never shy about bragging on her children and grandchildren. She was a loving wife, devoted mother, and extremely loyal friend, who always found good in every person and situation. She was revered as a second mother to many. A private funeral service (due to COVID) will be held at Calvary Episcopal Church on Saturday, November 14, followed by a graveside burial at Greenlawn Memorial Park. Memorials may be made to Calvary Episcopal Church, Richmond, TX, pancan.org, or MD Anderson. Words of condolence may be left for the Carrell and Heck family at www.davisgreenlawnfh.com Arrangements are under the direction of Davis-Greenlawn Funeral Home, 3900 B.F. Terry Blvd., Rosenberg, Texas 77471, Phone: 281-341-8800.

Ruth Schori Carrell, 73, of Richmond, TX peacefully passed away on November 10, 2020 in her home with her three children by her side. She gracefully battled pancreatic cancer for the last three and a half years. Ruth was born in Ketchikan,... View Obituary & Service Information

The family of Ruth Schori Carrell created this Life Tributes page to make it easy to share your memories.

Send flowers to the Carrell family.