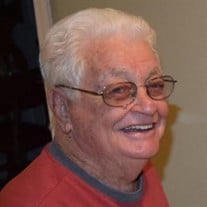 Roy Franklin Sims passed away into the loving arms of the Lord, in the presence of his family, on August 31, 2020 at his home in Rosenberg, Texas just a few days shy of his 96th birthday. Roy was born on September 6, 1924 in Damon Texas as part of a large family of nine children. He moved with his family to Thompsons, where his Father worked for Humble Oil, and attended school through sixth grade. Roy completed eleven years of school and graduated from Richmond High School in 1942. Soon thereafter, he joined the United States Coast Guard where he served his country until he returned home. He started a career as a truck pusher primarily moving oil rigs between Texas and Louisiana. He spent many nights on the road as a truck driver and loved beanie-weenies. He ate so many cans of them, his CB Handle was “Beanie-Weenie”! He had a knack for remembering every major interstate highway he travelled in the country over fifty years. If he travelled it once, he memorized the path in his mind and could easily describe it years later to family and friends. He spoke about many beautiful places he saw in the United States, Colorado being the most beautiful to him. He was a proud American and loved this country! Roy met a Cajun girl from Crowley, Louisiana named Lydia Theresa Doucet at a café in Lotus, Texas the summer of 1951 when she was visiting her sister. Lydia swept Roy off his feet with her beauty and they married later that same year. They settled in Rosenberg where they began their family. Roy’s work kept him on the road driving trucks for many years, and as a result, they also moved the family quite often to Louisiana and back to Texas over the years. After their sons finished high school, they moved back to New Iberia, Louisiana in 1975 where they joined Temple Baptist Church forming lifelong relationships. Roy was a born again Christian and devout Baptist. He adored their fellow worshipers, the culture, food and the people of South Louisiana. As years went by, they decided to leave their friends and family in Louisiana and return to the Rosenberg area to be near their three sons and families in 2005. Roy never knew a stranger and enjoyed talking to anyone he met. He loved fishing, watching old westerns on TV, telling jokes, watching his sons play sports at Lamar as well as his grandsons’ football at Foster High School. He loved eating, never missed a meal, and absolutely loved his wife’s cooking! He was very proud of his three independent and strong sons and cherished the time he was able to spend with his grandchildren. Roy was preceded in death by his Father and Mother, Frank and Marie Sims, five sisters Evelyn, Oma Mae, Florine, Mildred and Faye, two brothers Walter (Humpy) and Daniel Sims. He is survived by his younger sister Raye Dean as well as his beloved wife of 69 years Lydia Doucet Sims, Son Roy Allen Sims and wife Liz, Wesley Sims and wife Paula, and Larry Sims and wife Cheryl. He is also survived by five grandchildren and five great grandchildren. Visitation will be held at Davis Greenlawn Chapel September 3, 2020 from 5:30 pm to 7:30 pm at 3900 B.F. Terry Boulevard where family and friends are welcome. Burial will be September 4, 2020 at 9:00 a.m. also at Davis Greenlawn Chapel. We will celebrate Roy’s simple, yet remarkable life with family, friends, brothers and sisters at Calvary Baptist Church, 4111 Airport Avenue in Rosenberg, Texas after his burial.

Roy Franklin Sims passed away into the loving arms of the Lord, in the presence of his family, on August 31, 2020 at his home in Rosenberg, Texas just a few days shy of his 96th birthday. Roy was born on September 6, 1924 in Damon Texas as... View Obituary & Service Information

The family of Roy Franklin Sims created this Life Tributes page to make it easy to share your memories.

Roy Franklin Sims passed away into the loving arms of the Lord,...

Send flowers to the Sims family.