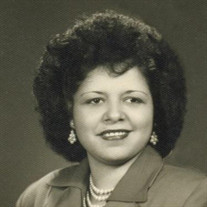 Rosa Saenz Ramirez, 91, loving wife, mother, and grandmother, passed away peacefully at her home in Richmond on Friday, April 30, 2021. Rosa was born on August 30, 1929 on the Sartartia Plantation in present-day Sugar Land, where her parents lived and worked. She was raised in a loving home on the farm by her loving parents. Their humble circumstances did not allow her more than a grade school education. Tragically, her mother died in childbirth in 1945, placing her as a teenager in the role of surrogate mother to younger brother, Ramon, a role she was to fill throughout his adult life, as well. One day at church, a handsome young man, Ysabel Ramirez, caught her eye. A courtship ensued, interrupted only by Ysabel’s service in the army. Upon his honorable discharge, they were married on December 6, 1947. Within a few years they were able to borrow the funds to build a modest two-bedroom home for their growing family on Rosenberg’s north side. As the family grew, so did the need to supplement Ysabel’s income from working at the White House Grocery. Together they opened Ramirez Grocery Store on Avenue E in Rosenberg, which they operated for twenty-five years. Rosa would tend the store during the day while Ysabel worked at the White House Grocery Store. When Ysabel got off work, he would take over while Rosa went home to feed the children. Both worked long hours and weekends for years to make sure their children had the opportunities for education and advancement they had not. Rosa made sure her seven children were healthy, well-fed, and well-dressed for school despite their modest circumstances. With love and sacrifice they made it work. Their efforts paid off, as each of their seven children graduated from high school and then attended college, earning a combined total of eleven degrees. Since neither Rosa nor Ysabel had more than a few years of school, the education of their children represented a great reward for their years of devotion and sacrifice. Their retirement years were spent following the achievements of their children and enjoying their grandchildren. Ysabel passed away in 2001, leaving Rosa a widow for more than twenty years. Although we miss her presence, we are comforted thinking of the wonderful reunion with Ysabel that awaited her. Rosa was preceded in death by her loving husband of more than fifty years, Ysabel G. “Joe” Ramirez, her father Octavio Saenz, mother Manuela Cantu, sister Lucia Mendez, and brothers Manuel and Ramon Saenz, and grandson Manuel Garza II. She is survived by daughters Esther and Hortensia Ramirez, Alice Balli, and Mary Garza, and sons Joe, Richard, and Julian Ramirez, and grandchildren Crystal Ramirez, Michael Balli, Lisa Balli Garrison, Aimee Garza Almeda, Anne Garza Gonzalez, Jessica Ramirez Ogden, Lauren Ramirez Jensen, and Matthew Ramirez, and great-grandchildren Marco Garza, Alyssa Garza, Wesley Ogden, Wyatt Ogden, and Miranda Balli. Funeral services are in care of Davis-Greenlawn Funeral Chapel at 3900 B. F. Terry Blvd. in Rosenberg. A visitation will be held at 5 pm on Monday, May 10th. A rosary will be recited at 7 pm. A graveside ceremony will begin inside the Davis-Greenlawn Chapel at 10 am on Tuesday, May 11th, followed by a walk to the burial site next to her husband’s gravesite.

Rosa Saenz Ramirez, 91, loving wife, mother, and grandmother, passed away peacefully at her home in Richmond on Friday, April 30, 2021. Rosa was born on August 30, 1929 on the Sartartia Plantation in present-day Sugar Land, where her parents... View Obituary & Service Information

The family of Rosa Saenz Ramirez created this Life Tributes page to make it easy to share your memories.