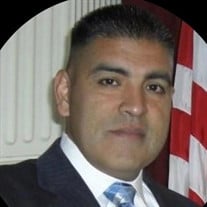 RONALD MARTIN CASTILLO, age 53 of Richmond, died on Friday, May 28, 2021. The son of Rudolph and Frances Castillo, he was born on June 5, 1967 in Sugar Land, Texas. Mr. Castillo was a graduate of Southwest Texas State University Class of 1989, with a Bachelor of Science in Criminal Justice. In 1991, Mr. Castillo began his career as a Fort Bend County Community Corrections Officer. He was quickly promoted to Community Service Coordinator then to Executive Assistant. As the Executive Assistant, he advised two Fort Bend County Commissioners, testified before numerous legislative committees, and executed community and intergovernmental relations projects to help involve the people of Fort Bend County with their government. In 2005, Mr. Castillo became the Executive Director of the Fort Bend Community Revitalization Projects (CORPS). In this position he helped the elderly, disabled, and low-income persons in Fort Bend rebuild and revitalize their homes. In 2017, Mr. Castillo was named Director of Court Services for Inspired Behavioral Health. In this role he assisted persons with mental illness navigate the criminal justice system and rebuild their lives. Mr. Castillo helped 1000s of people, from the Rio Grande Valley to North Texas. He fought for their dignity, their equality and their right to live a normal life. He had a warm heart, loved his family, was a fast friend, and dedicated his life to his community and the county he was born and raised in. He was a Board Member of Fort Bend County Tax Increment Reinvestment Zone #2, a member of the National Hispanic Professional Organization, Chairman of the Go Tejano Committee for the Fort Bend County Fair Association, a member of the Spanish Language Advisory Committee for Fort Bend Elections Office, a Life Member of the Fort Bend Fair Association, a Captain of the Rodeo Express Committee for the Houston Livestock Show & Rodeo, and Chairman of the American Red Cross Leadership Council. Mr. Castillo was preceded in death by his mother Frances Castillo and his brother Rudolph “Rudy” Castillo, II. He is survived by his father Rudolph Castillo Sr, his wife Brandy Castillo, his children Lauren Castillo and Rodrigo Gonzalez, Katlyn Castillo, Ronald Castillo, Jr., stepdaughter Kaylee Leonhardt, his brothers Rick Castillo and Robert Castillo, his sisters Janie Castillo Saucedo and Sylvia Castillo Betancourt and husband Joe Betancourt, sister in law Gloria Castillo, numerous nieces and nephews, great nieces and nephews, and Godfather to many. The visitation will be held on Thursday, June 3 (4pm to 8pm) and rosary (7pm) at Davis Greenlawn at 3900 B.F. Terry Blvd., Rosenberg TX 77471. Services will be Friday, June 4 at 1pm at Holy Family Catholic Church at 1510 Fifth Street, Missouri City, TX 77489. The burial will follow at Davis Greenlawn.

RONALD MARTIN CASTILLO, age 53 of Richmond, died on Friday, May 28, 2021. The son of Rudolph and Frances Castillo, he was born on June 5, 1967 in Sugar Land, Texas. Mr. Castillo was a graduate of Southwest Texas State University Class of 1989,... View Obituary & Service Information

The family of Ronald Martin Castillo created this Life Tributes page to make it easy to share your memories.

RONALD MARTIN CASTILLO, age 53 of Richmond, died on Friday, May...

Send flowers to the Castillo family.