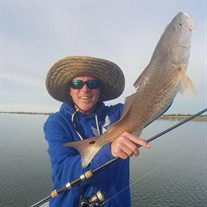 RONALD (Ron) ALLEN BROCK An avid fisherman and lover of nature and the outdoors, Ronald (Ron) Brock passed away in Rosenberg, TX, after his valiant struggle with a lengthy illness. As his life ended, he was surrounded by loving family and friends. Ron was born December 9, 1973, in Houston, TX, and passed away on September 5, 2021. Ron’s pride and joy was his son, Sebastian, whom he enjoyed teaching to fish, play basketball, and cook. Summers entailed fishing in Matagorda (Sebastian often caught the biggest fish), watching movies, and going to their “secret park with the secret tree.” Ron was an all around guy, and had a deep bond with his friends, many friendships lasting thirty years. He loved the peaks of Colorado, as well as sitting in his own backyard, “his piece of the world.” He could be just a man with his dog, or the fisherman in a boat out on the water. His Grandpa Whiskers instilled the love of fishing in Ron at a very early age. Ron had an early career in the service industries before joining his stepfather, Dr. Larry Wilkinson, in his optometric practice, Vision Trends Eye Care in Rosenberg, TX. While there, Ron led the Optical Department for over twenty years. In his free time, Ron’s passion was to fish and travel, or even “travel fishing!” His trips to the Texas Gulf Coast, or Mexico, or Colorado would somehow always involve the rod and reel. He had many loving friends who shared this passion. He enjoyed his ability to speak enough Spanish to experience the freedom that afforded him in Mexico. Ron also enjoyed cooking and providing tasty delights to his friends and family. Of course, spicy hot foods found their way to his culinary specialties. Ron is survived by his son Sebastian Brock of Urbana, IL; parents Dr. Larry and Linda Wilkinson; and stepsister, Taryn Wilkinson Jones. He is also survived by his aunts and uncles, Tommy Brock and Maddy; Ronald Brock and Agnus, Lisa Brock, and Patricia Wilkinson Schraub and Phillip, as well as numerous cousins and nieces and nephews. A special thanks to Uncle Tommy and Maddy for the support they provided to his parents during Ron’s illness. Ron is also survived by his godchildren, Valery and Santiago Enriquez. Ron was preceded in death by his grandparents, Fred and Elsie Brock, and Dr. Jack and Helen (Tot) Wilkinson, and his Uncle John Brock. The family would especially like to thank Jesse and Krystal Enriquez , for their unselfish attention to Ron at his most uncertain time. Jesse was a gift of strength beyond call. Special thanks also to Victoria Rivas, who always provided support to “her little brother” Ron, both before and during his illness. For those wishing, memorials may be given in Ron’s memory to Rosenberg Richmond Helping Hands at https://roserichhelpinghands.org/?giveforms=donation-form., or donations can be mailed to RRHH at P. O. Box 1268, Richmond, TX 77469. Tributes and words of condolence may be left for the family at www.davisgreenlawnfh.com. Visitation begins at 12:00 noon, on Saturday, September 18, 2021, with a celebration of Ron’s life at 1:00 p.m. Arrangements have been entrusted to Davis-Greenlawn Funeral Chapel, 3900 B.F. Terry Blvd, Rosenberg, TX 77471.

RONALD (Ron) ALLEN BROCK An avid fisherman and lover of nature and the outdoors, Ronald (Ron) Brock passed away in Rosenberg, TX, after his valiant struggle with a lengthy illness. As his life ended, he was surrounded by loving family and... View Obituary & Service Information

The family of Ronald Allen Brock created this Life Tributes page to make it easy to share your memories.

An avid fisherman and lover of nature...

Send flowers to the Brock family.