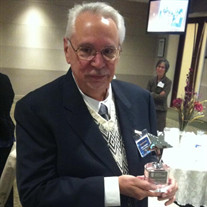 Robert Allen Crenshaw died peacefully on Nov. 15, 2021 in Sugarland, Texas at the age of 80. Robert is survived by his four children, Sheryl Gilchrist (Austin, TX), Melonie Crenshaw (Sugarland, TX), Patrick Crenshaw (Jacksonville, FL), and Carolyn Hill (Missouri City, TX): and his grandchildren: Jonathan, Everett, Clark, Dinah, Madeline, Timothy, Chlois, Callie, Anna, and Mason: and his great grandchild Liam. He is preceded in death by his beloved wife Kay, his brother, William (Bill), and his parents Everett and Chlois Crenshaw. Robert was born on February 3, 1941 in Harlingen, TX. He spent his youth in Raymondville, TX where he met and married Kay Ellen Cooley, his high school sweetheart. They were fortunate to celebrate their 40th anniversary before her passing in 2002. He graduated from University of Texas at Austin in 1963 with a degree in Accounting. He remained a loyal Longhorn fan throughout his life (Hook’em Horns!) Later, he completed his MBA at Houston Baptist University. He moved to Houston to work for H & R Block. However, Robert spent most of his professional life working for Continental Oil Co (CONOCO) in both Houston, TX and Ponca CIty, OK. Post-retirement, Robert followed his true calling into the Prison ministry. He was a volunteer for the TDCJ since 1997, faithfully serving in the InnerChange Freedom Initiative (IFI) program at the Carol Vance Unit in Richmond, Texas. Robert gave his time as a mentor to his “friends in white” as they prepared for release from prison. He facilitated and coordinated classes in the Alpha program and served as a Kairos leader. He was also a key sponsor and facilitator for the highly effective Toastmaster program that teaches the offender how to communicate and maintain order, self-discipline and professionalism. He was especially proud of his work at the Jester III hospital unit within the Carol Vance Correctional facility, ministering to inmates who were ill. His role as sponsor and facilitator enabled Robert to demonstrate moral integrity, leadership and faithfulness. He originated several supplemental programs such as providing water bottles for the correctional officers and the “Search for Significance” program. He also helped “dress up” the chapel and grounds with plants, shrubs and miscellaneous decorations in preparation for a regional wardens meeting that was to be held at the IFI chapel. Additionally, he was one of the first to be trained and serve as a Certified Volunteer Chaplain’s Assistant to the unit chaplain. Robert regularly would find ways to serve that went above and beyond. One such example is that he would take time to facilitate Shabat services on Fridays for Jewish inmates who were in need of spiritual support. Robert also played a vital role in growing the prison ministry at Christ Church in Sugarland, TX by mentoring over 50 volunteers to serve with him through the Restorative Justice Ministries CUMC. This program is now one of the largest in the state as a direct result of his leadership and guidance. For his tireless commitment, which represents excellence in faithfulness and servanthood, Robert Crenshaw was selected to receive the honorable Correctional Institutions Division Volunteer award in 2011. That same year, Robert Crenshaw also received the National Prison Fellowship Shining Star Award in Washington D.C. with his family present. The highlight of that trip was getting to meet Chuck Colson, founder of Prison Fellowship International. Robert was a dearly loved man by many: his family, his friends and his ‘friends in white”. He will be remembered for his generous spirit, his purity of faith, his ever positive outlook on life, his spirited singing, his boisterous laughter, his colorful expressions, and for those of us who knew him then, his colorful fashion of the 70’s. Later, Gator!! Love ya! Love ya! A visitation is scheduled for Nov. 18 at Davis Greenlawn in Rosenberg, TX. The funeral services will be held on Friday, Nov. 19 at 11 am at Christ Church in Sugarland, TX. All are welcome to attend and celebrate Robert’s life. In lieu of flowers, please send donations to Christ Church Sugarland, TX (Restorative Justice Ministries). The family would like to thank the dedicated staff at Optimum Personal Care. Tributes and words of condolence may be left for the family at www.davisgreenlawnfh.com.

The family of Robert A. Crenshaw created this Life Tributes page to make it easy to share your memories.

Send flowers to the Crenshaw family.