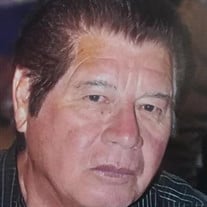 Rito Leo Ramirez of Sugar Land, Texas peacefully passed away at home with family by his side on Friday, May 6, 2022. Rito was born in Sugar Land, Texas on January 26, 1941 to Aniceto and Connie Ramirez. Rito graduated from Missouri City High School in 1959, he continued his education and received an associate degree. He had a long successful career as a Tool Designer working for WKM, J. W. Lighting and Drill Quip where he retired in 2007. Rito had various hobbies and interests. He loved his children and grandchildren and enjoyed visiting for family events, holidays, and other special occasions. He enjoyed taking casino trips. He had a passion for sports and when he was young, played baseball, track, football, basketball, and tennis. He loved the game of golf and just about any weekend you would find him hitting 18 rounds on any of his favorite courses. He was a competitive bowler playing on many leagues and achieving a perfect bowling score on several occasions. He was an avid Dallas Cowboys and Houston Astros fan. Rito was also a huge Elvis Presley fan, often listening to many of his favorite songs or watching his movies. He enjoyed working in the yard and took pride in keeping his lawn perfectly manicured. He loved his westerns and watched Bonanza and Gunsmoke episodes over and over. Rito is survived by his wife of 25 years Barbara Ramirez, his daughters Gina Ramirez, Christy Ramirez Ibarra, Shelley Ramirez Sedillo and husband Mike Sedillo, the daughters’ mother Karen Jones, youngest daughter Rebecca Cloke, stepdaughter Nicole Bell, sister Virginia Saldua and husband Phillip Saldua, brother John Ramirez and husband Jeff Benavides, six grandchildren, three step grandchildren, one great grandchild and numerous cousins, nieces, and nephews. He was preceded in death by his father Aniceto, Mother Connie, sister Margie Stone and other beloved relatives. Memorial service will be held on Saturday, May 28, 2022, at 11:00 a.m. in the chapel of Davis Green Lawn Funeral Home. In lieu of flowers donations can be made to Holy Family Catholic Church building fund. Holy Family Church 1510 Fifth Street Missouri City, TX 77489. Arrangements are under the direction of Davis-Greenlawn Funeral Home, 3900 B.F. Terry Blvd., Rosenberg, Texas 77471, Phone: 281-341-8800.

Rito Leo Ramirez of Sugar Land, Texas peacefully passed away at home with family by his side on Friday, May 6, 2022. Rito was born in Sugar Land, Texas on January 26, 1941 to Aniceto and Connie Ramirez. Rito graduated from Missouri City High... View Obituary & Service Information

The family of Rito Leo Ramirez created this Life Tributes page to make it easy to share your memories.