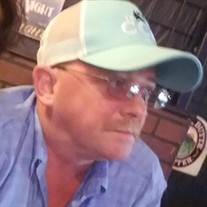 Our beloved son, brother, and uncle, Richard Craig Zak, earned his heavenly wings on June 8, 2022. He is survived by his parents Richard and Annie Zak, sister Suzanne Crippen and husband Darrell, niece and nephew Elizabeth and Benjamin Crippen, and special aunt (Tete) Loretta Zak. He is preceded in death by his grandparents Frank and Annie Fojtik Michalek, Louis and Louise Pekar Zak, and special uncle Edward Zak. Everyone who knew him called him Craig. Many knew Craig as a good friend who would lend a helping hand to anyone who needed it. His favorite passion was fishing, and he often took his boat out to Chinquapin Bay in Matagorda to wet a hook. He was a skilled handyman and took pride in maintaining his boat, vehicle, and parent’s home. Family time was precious to him, and he often cooked Sunday dinners. He thought the world of his niece and nephew, Elizabeth and Benjamin, and always encouraged them to be the best they could be. Thank you to everyone who kept Craig in their prayers. He is now at peace and free of pain. Special thanks go out to our dear family friends Jan Abendroth, Marnie Peters, and David and Cecelia Talamantez for their unwavering support and continued help during this most trying time. In lieu of flowers, memorials may be sent to the American Cancer Society: https://www.cancerresearch.org. Visitation will be held from 5:00 p.m. – 8:00 p.m. with a Rosary at 7:00 p.m., Monday, June 13, 2022 in the Chapel of Davis-Greenlawn Funeral Home in Rosenberg. The funeral service will be held at 10:00 a.m., Tuesday, June 14, 2022 in the Chapel of Davis-Greenlawn Funeral Home in Rosenberg with burial to follow at Greenlawn Memorial Park in Rosenberg. Tributes and words of condolence may be left for the family at www.davisgreenlawnfh.com. Arrangements are under the direction of Davis-Greenlawn Funeral Home, 3900 B.F. Terry Blvd. (Hwy 59 South @ FM 2218), Rosenberg, Texas 77471, Phone: 281-341-8800.

The family of Richard Craig Zak created this Life Tributes page to make it easy to share your memories.

Send flowers to the Zak family.