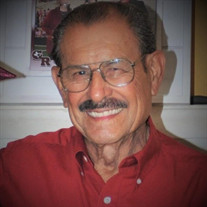 Ricardo H. De León of Richmond, Texas passed away peacefully in his home February 16, 2021 at the age of 87 surrounded by his loving family. He was born December 19, 1933 in Ciudad Mier, Tamaulipas, Mexico to Ricardo and Elvira De León. He grew up with nine siblings, seven sisters and two brothers. He proudly served his country from 1955 to 1957 in the United States Army - 2nd Division 37th Armored Field Artillery Battalion. He was stationed in Fort Lewis, Washington, as well as Alaska. He finished out his term in the military by serving in the National Guard from 1957 to 1961. After his military service, he married the love of his life and started his family. He settled in Richmond/Rosenberg, and he serviced the community with his trade as a barber and auto mechanic for many years before his retirement. He spent much of his time enjoying life with his family and friends, but he especially enjoyed creating memories with his grandchildren. He was a loving husband, father, grandfather, brother, uncle, and good friend to many, and he will be greatly missed. He is survived by his loving wife of nearly 54 years, Estela Esparza De León; his children, Elida De León Muñoz (Robert), Ricardo De León, Jr. (Connie), Elvia De León López (Martin), Carlos De León, and Estela De León Lozano (Felix); his grandchildren, Esteban and Maricela Muñoz, Rico and Rachel De León, Gabriela and Jessica López, and Alyssa and Emma Lozano; his sisters, Hilda Ramirez, Olga Azuara, Elva Mejorado, Raquel Sanchez, Arcelia Flores, and Gloria Rodriguez, along with numerous nephews, nieces, godchildren and friends. He is preceded in death by his parents, his sister Olivia Garate, and his brothers Emilio and Homero De León. The De León family would like to thank the staff of Silverado Hospice Care and the nurses at Memorial Hermann Heart and Vascular Institute who provided exceptional care to Ricardo. We would also like to thank Father Jesse Garcia, Angelica Valdez, Adolfo Rodriguez, and many other family and friends who took the time to come and visit our father in his final days. In lieu of flowers, the family asks that you please consider donating blood to the Gulf Coast Regional Blood Center or a monetary donation to St. John Fisher Catholic Church in Richmond, Texas. Visitation will be held on Wednesday, February 24, 2021 from 4:00 p.m. - 8:00 p.m., with a rosary at 7:00 p.m. in the Chapel of Davis Greenlawn Funeral Home in Rosenberg. The funeral Mass will be held Thursday, February 25, 2021 at 10:00 a.m. at St. John Fisher Catholic Church in Richmond with Father Jesse Garcia officiating. Burial with full military honors to follow at Greenlawn Memorial Park in Rosenberg. The funeral home is limited to 50 people at a time, and social distancing and masks will be required during both occasions. In light of the current pandemic, the family regretfully shares there will be no social gathering after the funeral. Words of condolence may be left for the family at www.davisgreenlawnfh.com. Arrangements are under the direction of Davis-Greenlawn Funeral Home, 3900 B.F. Terry Blvd., Rosenberg, Texas 77471, Phone: 281-341-8800.

Ricardo H. De León of Richmond, Texas passed away peacefully in his home February 16, 2021 at the age of 87 surrounded by his loving family. He was born December 19, 1933 in Ciudad Mier, Tamaulipas, Mexico to Ricardo and Elvira De León. He... View Obituary & Service Information

The family of Ricardo DeLeon created this Life Tributes page to make it easy to share your memories.

Send flowers to the DeLeon family.