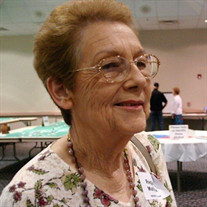 Regina Thompson Matlock, 89, a native Houstonian, passed away on Monday, February 8th, 2021 in Houston, Texas. Regina was born on October 5th, 1931 at St. Joseph’s Hospital to Quinn and Elizabeth (Bessie) (Marx) Thompson. She was raised in Second Ward on Jenkins St., attending grade school at Blessed Sacrament Catholic School, a few blocks from her home. Regina grew up with her two younger sisters, Rita Ann (Foretich), and Lydia (Chew). Tragedy struck the family during World War II when the girls’ father, Quinn, was killed in a railcar accident at the ship channel while working for the war effort. Regina’s mother was widowed, and left to raise three young girls on her own. As a result, Regina grew up with the traits of independence, self-reliance, and a willingness to try new things. She also learned a sense of thriftiness that could not be surpassed. For high school, Regina attended St. Agnes Academy and graduated in 1949. By the time Regina graduated from high school, she had already met the man she was to marry. Ernest Matlock was living with and working as an exterminator employee for the couple who lived across the street from Regina. Ernest had spotted Regina out in her front yard and inquired about her. The next thing he knew, he was going to senior prom with Regina. They quickly fell in love and were married on November 4th, 1950. They went on to have one daughter and five sons. Regina was the ultimate stay-at-home mother. She kept the household totally organized and running smoothly. At the same time, she was able to show her love for everyone. It didn’t matter who you were, or where you came from, she saw all people equally. She treated everyone with kindness, and had a heart of gold. She shared her time and talents in the most generous ways possible. She baked, quilted, mended, and crocheted herself into everyone’s hearts. Her children’s birthday cakes were expressions of her creativity. She was the best listener in the world. She was involved in her children’s lives, but also gave her time to the church, the school, the PTA, Little League, and various other organizations. In a tragic twist of irony in 1971, her and Ernest’s youngest child, Quinn, was killed in an automobile accident. In the late 70s, Ernest and Regina moved to Old Dime Box, Tx to experience the country living that Ernest missed from his childhood. Though it was lonely at first, Regina adapted nicely, even though it meant leaving behind her two close sisters and her grown children. Regina’s mother, Bessie, came with them to the country, in order for her to continue to live nearby them so that they could care for her. Regina babysat for one of the children in the community. Later, she worked at the Dime Box and Lexington schools as a cafeteria worker. She loved working around others, seeing the school children every day, and earning her own income. They remained in Dime Box until 2000, when they returned to Houston to be closer to medical care, their children, and now grandchildren. Over their years of marriage, Regina and Ernest were members of Holy Family Catholic Church in Stafford, Tx, St Joseph Catholic Church in Dime Box, Tx, and St Leo’s Catholic Church in Houston, Tx. They celebrated their 69th year of marriage in November 2019, prior to the passing of her husband. Most recently, Regina received pastoral care from Prince of Peace Catholic Church in Houston, Tx while residing at her nursing home. In addition to her parents, Regina was preceded in death by her husband Ernest Matlock (2019), her son, Quinn Gerard Matlock (1971), and her sister Rita Ann Foretich (2020). Survivors include her children, Diane (Joe) Roberts, Jerry (Arlene) Matlock, David (Peggy) Matlock, Robert (Thao Ly) Matlock, James (Paria) Matlock; sister, Lydia (Alex) Chew; grandchildren Vincent and Gina Roberts, Matthew and Joseph Matlock, and step grandchildren Brian (Anna) and Blake (Amy) Boyter; five great grandchildren; special nieces Ann Brooks, Mary Foretich, Helen Dolezal and nephew Billy Dolezal, and a large extended family, as well as many friends. Her services, officiated by Deacon Billy Guerrero of Rosenberg, will be held on Monday, March 1, 2021, In the Chapel of Davis-Greenlawn Funeral Home in Rosenberg, Tx. 3900 B.F.Terry Blvd. She is to be buried in Greenlawn Memorial Park next to her husband and son. Serving proudly as pallbearers are Regina’s son, David Matlock, and grandchildren, Vincent and Gina Roberts, Matthew Matlock, and Brian and Blake Boyter. We thank all of you for your service to our family. The family would like to thank Dr. Asim Khawaja, Amanda R.N., and Camille, who provided exceptional care to Regina as caregivers from Sunset Hospice. We also thank Dr M. Hanif and all the other doctors, nurses, and staff who loved and cared for our mother during the hard year of 2020 and beyond. We would also like to thank Davis-Greenlawn, especially Tyler and Kathy, for their loving care of our family needs during our time of grief. Words of condolence may be left at www.davisgreenlawnfh.com If desired, donations may be made in Regina’s name to the: Alzheimer’s Association 6055 S Loop E Frwy, Houston, TX 77087

The family of Regina T. Matlock created this Life Tributes page to make it easy to share your memories.

Send flowers to the Matlock family.