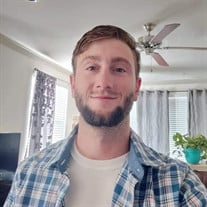 Raymond L. Graves, Jr, 29, was born on June 21, 1991 and he passed away on March 6, 2021 in Orchard, Texas in a car accident. Ray Jr. was born and raised in Houston, Texas. Raymond graduated from Tehana High school in May 2009. He was everybody’s friend, made us laugh, smile and cry. He worked for his Uncle Ray’s construction company and was very dependable, smart and loyal. He was always so polite, considerate of others and he never met a stranger he wouldn’t help. He is survived by his father, Raymond L. Graves, Sr.; stepmother, Clara Graves; brothers, Austin E. Bollinger, Sam Snyder and wife Misti, and Zach Snyder and wife Latasha; grandparents, Patricia Nitsche, Gary Bollinger, Sr., Patricia Perkins, Charles and Tina Graves; Uncles, Ray Bollinger and wife Linda, Donald Graves and wife Felicia, Kelly Stump and wife Lacy, Shane Graves, Danny Graves and Mark Alexander and wife, Rhonda; aunts, Lea Stump, Jodie Bradford and husband Chris, MaChelle Byrnes and husband Johnie, Michelle and Allison; along with a host of extended relatives, cousins, friends and to many to name that will miss him dearly. He is also survived by his special friend, Monica Reyes and special pet, Orion. Raymond is preceded in death by his mother, Jeanie Graves; Uncle Gary Bollinger, Jr.; grandparents, George and Edna Bollinger; and great grandparents, Walter and Juanita Richardson. Visitation will be held from 12:00 p.m. until service time at 2:00 p.m., Monday, March 15, 2021 in the Chapel of Davis-Greenlawn Funeral Home in Rosenberg. The service will be live streamed. Burial to follow at Greenlawn Memorial Park in Rosenberg. Pallbearers included: Nate Leetka, Jacob Sauter, Samuel Snyder, TJ Bradford, Austin Bollinger and Ray Bollinger. The family requests in lieu of flowers a donation be made in Raymond's name to one of the following charities: St. Jude Children's Hospital or Feeding America.org Thank you in advance for your consideration. Words of condolence may be left for the family at www.davisgreenlawnfh.com Arrangements are under the direction of Davis-Greenlawn Funeral Home, 3900 B.F. Terry Blvd., Rosenberg, Texas 77471, Phone: 281-341-8800.

The family of Raymond L. Graves, Jr. created this Life Tributes page to make it easy to share your memories.

Send flowers to the Graves, family.