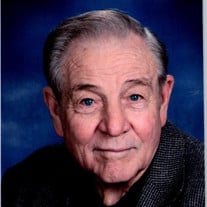 Raymond Freund of Needville, Texas, went to be with the Lord on February 6, 2022, in Richmond, Texas at the age of 89. Raymond was born on October 2, 1932, on the family farm in Needville. Growing up as part of the Needville community he attended Needville High School, graduating in 1950 as a member of the 2nd graduating class. Soon after graduating, Raymond enlisted in the U.S. Army and was stationed at Ft. Hood. After his time in the service, Raymond returned to Needville to farm and begin a career at Cameron Iron Works in Houston. After retirement from Cameron Iron Works, he worked in the technology maintenance department at Lamar C.I.S.D. During a weekend home from Ft. Hood, he met the love of his life, Norma Rosenbaum. They married in 1957. Throughout his life as he married, started a family and worked in other industries, farming remained near to his heart. He enjoyed growing crops with his dad and later with his son. Even years after his last harvest, he would try to stay connected by following the progress of the local farms wanting to take a drive to “check the fields”. Raymond had many talents, in his family’s eyes “Dad could do anything.” He was a “Jack of all trades.” He was a very patient man and would do anything for anyone. He enjoyed hunting, fishing, family camping trips, and summer vacations. He was a devoted family man and never wanted to miss any activity his children or grandchildren were involved in. Raymond was preceded in death by his parents, Troy and Annie Freund, his brother Troy Allen and wife Dorothy and his brother, Gene. He is survived by his wife of 64 years, Norma Rosenbaum Freund, his daughters; Sandra (Peter) Larkam, Cindy (Kenny) Kendziora and son, Dan (Tami) Freund. Grandchildren; William (Anna) Larkam, Matthew Larkam, Andrew Larkam, Paige (Kody) Shaw, Claire Kendziora, Keith (Krysta) Freund, Kyle (Sara) Freund, Kristi Freund and Connor Freund. Great-grandchildren; Mason, Preston, Harrison, Charlotte and Pierson Larkam, Wyatt and Emma Shaw. He is also survived by his sister, Barbara Freund Hollier and sister-in-law Gloria Freund and numerous nieces and nephews. For those wishing, please consider donating to Immanuel Evangelical Church or Needville Senior Citizens. The family would like to thank the 5th floor nursing staff and doctors taking care of Raymond at Memorial Hermann Sugar Land. Also, the angel nurse, Lori at OakBend Hospice care. Their compassion and professionalism will forever be appreciated. A memorial service will be held at 2:00 p.m., Saturday, February 19, 2022 at Immanuel Evangelical Church in Needville.

Raymond Freund of Needville, Texas, went to be with the Lord on February 6, 2022, in Richmond, Texas at the age of 89. Raymond was born on October 2, 1932, on the family farm in Needville. Growing up as part of the Needville community he attended... View Obituary & Service Information

The family of Raymond Freund created this Life Tributes page to make it easy to share your memories.

Raymond Freund of Needville, Texas, went to be with the Lord...

Send flowers to the Freund family.