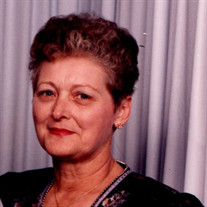 Ranvae Ronella (Johnson) Baker, beloved wife, mother, grandmother and great grandmother, passed away peacefully on October 11, 2021 in Richmond, Texas. Ranvae was born in Liscomb, Iowa on June 30, 1938 the fourth child born to Winifield Melick Johnson and Evelyn F. Bixby. She was married to Donald Eugene Baker on October 28, 1956 until his passing on September 15th, 2005. She leaves two children: Daughter, Janice Rae Kizziah and husband, William; and their 4 children, Megan Broughton, husband Tyler and their children, Abigail & Brody, Tiffany Kizziah and daughter Kiley, Chase Kizziah and wife Marie and their son Ridley and Morgan Kizziah. Daughter, Lynette Kay Mote and her 4 children, Jason Baker and wife Amber and their sons Gage & Gunner, D.J. Banik (deceased), Jessica Casady and husband Ronnie and their 2 children Nola & River, and Justyn Mote. Ranvae lived in the Davenport, Iowa area and then in her early teens moved to her grandparent’s farm outside of Liscomb, Iowa. After graduation she worked at Joe’s Pizza in Marshalltown, Iowa where she met her true love Donald Baker. They moved to Liscomb where their daughters were born. In 1963, they moved outside of Green Mountain, Iowa and then in 1968 Don was transferred to Texas, where they lived in Houston and later in Richmond. Ranvae was involved in many things throughout her life. In High School, she was an active member of 4-H and Band. Don and Ranvae enjoyed being members of a performing square dance group and Ranvae hunted in the Iowa Women’s State Coon-Hunter hunt and actually won. Ranvae began a volunteer career in Girl Scouting in 1967 as a co-leader for the girls. She devoted over 50 years and served on many committees. She received numerous awards including: The Thanks Badge, The Family Life Badge, Tim Achievement Award, the Continued Service Award and the Catholic Houston/Galveston Diocese Ruth Award, just to name a few. Ranvae was a Breast Cancer Survivors for 28 years. Ranvae is preceded in death by her husband of 48 years Don, her parents, brother, Robert, sister, Mary Lou and grandson, D.J. Visitation will be held from 9:00 a.m. until service time at 10:00 a.m., Monday, October 18, 2021 in the Chapel of Davis-Greenlawn Funeral Home in Rosenberg. Burial to follow at Greenlawn Memorial Park in Rosenberg. Pallbearers will include: Jason Baker, Megan Broughton, Tiffany Kizziah, Chase Kizziah, Jessica Casady, Justyn Mote, Gage Baker and Gunner Baker. Honorary Pallbearers will include: Kiley Kizziah, Abigail Broughton, Brody Broughton, Ridley Kizziah, Nola Casady, River Casady and Morgan Kizziah. For those wishing, in lieu of flowers, please consider making a donation to Faith United Methodist Church, 4600 FM 359, Richmond, Texas 77406 or to Chocolate Bayou Cowboy Church, 6808 County Road 172, Alvin, Texas 77511. Tributes and words of condolence may be left for the family at www.davisgreenlawnfh.com. Arrangements are under the direction of Davis-Greenlawn Funeral Home, 3900 B.F. Terry Blvd., Rosenberg, Texas 77471, Phone: 281-341-8800.

The family of Ranvae Ronella (Johnson) Baker created this Life Tributes page to make it easy to share your memories.

Send flowers to the Baker family.