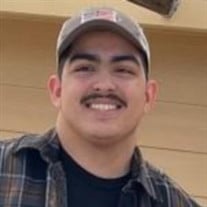 Peyton Ty Alejandro Chapa-Hearrell, 19, of Richmond, Texas passed away unexpectedly on April 1, 2021 in Richmond. Peyton was born on April 2, 2001 in Sugar Land, Texas to Joel Hearrell and Linda Chapa-Hearrell. He was a proud Tribal Citizen of the Chickasaw Nation. Peyton was a 2019 graduate of William B. Travis High School where he was the active Commanding Officer Cadet Lieutenant Colonel in the MCJROTC Program. Peyton was most recently working at Papa John’s Pizza, as a Lead Manager. His hobbies included working out, playing video games, going to the gun range and hanging out with family and friends. Peyton was always there to help anyone who needed it – guiding them and sharing his knowledge and friendship with them. He was attending school to become a nurse at WCJC. This loving son, grandson, brother, nephew and friend will truly be missed. Survivors include his Parents, Joel Hearrell & Linda Chapa-Hearrell; Grandparents, Charles & Joyce Hearrell, Guadalupe Chapa, Ignacio & Irene Chapa; Siblings, Triana, Dakota, Sierra, Dylan, Skyler & Luke; Uncles & Aunts, Ignacio & Kristin Chapa, Elizabeth & Robert Fonseca, Geraldo Chapa, Robert & Deena Hearrell, & Jeanna Hearrell; Cousins, Cameron, Noah & Giovanna; along with a host of extended family & friends. A service celebrating Peyton’s life will be held at 2:30 p.m., Thursday, April 8, 2021 at River Pointe Church in Richmond, Texas. The family will receive guests starting at 1:30 p.m. for viewing visitations. Flowers can be delivered to River Pointe Church on April 8th. For those wishing, in lieu of flowers, donations may be made to the Wounded Warrior Project in Peyton’s Honor. Tributes and words of condolence may be left for the family at www.davisgreenlawnfh.com. Arrangements are under the direction of Davis-Greenlawn Funeral Home, 3900 B.F. Terry Blvd., Rosenberg, Texas 77471, Phone: 281-341-8800.

Peyton Ty Alejandro Chapa-Hearrell, 19, of Richmond, Texas passed away unexpectedly on April 1, 2021 in Richmond. Peyton was born on April 2, 2001 in Sugar Land, Texas to Joel Hearrell and Linda Chapa-Hearrell. He was a proud Tribal Citizen... View Obituary & Service Information

The family of Peyton Ty Alejandro Chapa-Hearrell created this Life Tributes page to make it easy to share your memories.

Send flowers to the Chapa-Hearrell family.