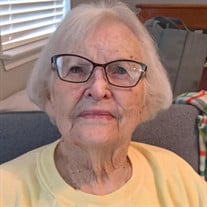 Peggy Traylor, 96, of Rosenberg, passed away on Thursday, August 26, 2021 in Sugar Land. She was born October 18, 1924 in Rusk, Texas to J. E. (John) Coker and Minnie Estelle Emde Coker. After being told to stay away from those “Traylor boys”, Peggy fell in love with and married Everett Traylor on June 14, 1941. This loving marriage lasted 68 years until “Tray’s” death in 2009. Peggy was a member of First Baptist Church of Rosenberg for over 75 years. She and Tray always occupied the pew between the crucifixion and resurrection stained glass windows in the church. She and Tray enjoyed making friends through garage sales and antiquing. Many Friday nights were spent enjoying local talent on stage at the Rosenberg Opry held in the old Cole Theatre building in downtown Rosenberg. Peggy was an avid word search fan, Catch Phrase player and still enjoyed an occasional game of dominoes. She delighted in phone conversations with Ruth, Perna, Dot, Ova, Tommy, Mary, Jeanie, JoAnn and other friends and family members. She was the last surviving member of her generation of the Coker and Traylor families. Peggy is preceded in death by her parents, her husband, Tray, son, Tommy Traylor and infant daughter, Diane. She is survived by daughters, Lynda Klasel and husband Donnie, Jan Gutowsky and husband, Jimmy, and daughter-in-law, Jean Traylor; grandchildren, DiAnn Secoy and husband, John, Wade Traylor and wife, Rani, Corrie Rompf and husband, John, Tommy Klasel, Russell Klasel and wife, Zoe, Joel Gutowsky and wife, Kimberly, and Jay Gutowsky; 16 great grandchildren and 1 great great grandchild. Funeral services will be held at 2:00 p.m., Monday, August 30, 2021 in the Chapel of Davis-Greenlawn Funeral Home in Rosenberg with visitation beginning at 1:00 p.m. Burial will follow at Greenlawn Memorial Park in Rosenberg. For those wishing, memorial donations may be made to First Baptist Church of Rosenberg, 1117 First Street, Rosenberg, TX 77471. The family requests that all in attendance at the visitation and funeral service kindly wear a mask. Tributes and words of condolence may be left for the family at www.davisgreenlawnfh.com. Arrangements are under the direction of Davis-Greenlawn Funeral Home, 3900 B.F. Terry Blvd., Rosenberg, Texas 77471, Phone: 281-341-8800.

The family of Peggy Traylor created this Life Tributes page to make it easy to share your memories.

Peggy Traylor, 96, of Rosenberg, passed away on Thursday, August...

Send flowers to the Traylor family.