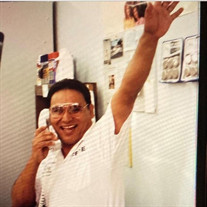 Pedro Peralez Ramirez, Jr. (also known as Pete Ramirez) February 22, 1944 - December 15, 2020 Pete Ramirez, Jr. was born to Rojelia and Pedro Ramirez in Gonzales, Texas on February 22, 1944. He is survived by his four children, Lisa Castillo, Anita Murillo and husband, Jody, Michael Ramirez and Diana Ramirez, the mother of his children, Lillie Gutierrez Ramirez, Grandchildren: Josh and wife, Crystal, Zach, Jacob, Julianna, Alyssa, Jordan, Jonah, Brianna, and JT. Great-grandchildren: Mia, Nicolas, Averi, and Emily Pete was a humble man with a heart of gold. He never met a stranger and his unforgettable laugh and smile always lit up a room. He started his career as a carpet installer that later flourished into a successful flooring business which he named East Bernard Decorating. What he enjoyed most were his Mexican culture family gatherings where he could join his brothers in singing and playing Hispanic music. In his earlier years, he would travel to Las Vegas to watch boxing matches for entertainment because he was passionate about the sport. When his grandchildren came along, it brought him great joy to spend time with them. He also took pride in making sure his yard was well-kept as he loved being outdoors. Pete was one of nine children. He is preceded in death by his parents, and also his brothers, Mingo and Mike. He is survived by his brother, Tony, and his sisters, Janie, Frances, Delores, Yolanda, and Elva along with many other family members and friends. Visitation will begin at 9:00 a.m. followed by a rosary at 10:30 a.m. and funeral service at 11:00 a.m. on Tuesday, December 22, 2020 in the Chapel of Davis-Greenlawn Funeral Home in Rosenberg. The burial will take place at Holy Cross Cemetery in East Bernard. Words of condolence may be left for the family at www.davisgreenlawnfh.com Arrangements are under the direction of Davis-Greenlawn Funeral Home, 3900 B.F. Terry Blvd., Rosenberg, Texas 77471, Phone: 281-341-8800.

The family of Pedro Peralez Ramirez Jr. created this Life Tributes page to make it easy to share your memories.