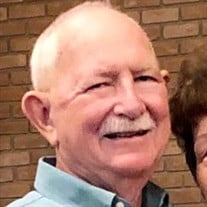 After a 27 month bravely fought battle against brain cancer (glioblastoma) Melvin passed into the arms of our Lord on Thursday, February 4, 2021. He was born September 24, 1943 in Merryville, Louisiana to Walter Emmons and Irene Smith Emmons who preceded him in death. Funeral services will be conducted by Pastor Charles Surovik at Greenlawn Funeral Home on Monday, February 8, 2021 with visitation from 10:00 and services at 11:00 followed by burial at Greenlawn Cemetery The youngest of 4 brothers and 1 sister, Melvin had very humble beginnings which greatly influenced his strong work ethic. Melvin attended Merryville schools before entering the US Navy in 1963 where he served his country aboard the USS Shadwell. He was proud of his service to his country and felt joining the Navy was one of his best decisions ever. After his discharge in 1967 he worked for Borden’s Ice Cream for 10 years and then joined the Grocers Company where he held many different positions until his retirement in 2007 after 28 years of service. After retirement, he had a few part-time jobs, but really enjoyed being a handy man. He regularly enjoyed helping and mentoring others with their home projects. Melvin volunteered his handy man services to various people in the community and worked with Thrivent to build Habitat for Humanity homes in Rosenberg. He also loved working in his vegetable garden and regularly had the most beautiful lawn in the neighborhood. He enjoyed fishing when he could and was a huge fan of LSU football. After a chance meeting in Houston and after only 4 months of dating, Melvin made another great decision when he married Marilyn Linney on December 2, 1967. Through this union they had 2 children, Jason and Farrah. He loved his family and was a great provider. Melvin was proud of his children and their accomplishments and attended and cheered at every game, recital, program, etc. Melvin was a founding and active member of New Covenant Fellowship, Rosenberg where he served as Elder for many years. Melvin was very serious about his faith. He was committed to lifting all in prayer and giving all to God. This never wavered. Melvin is also preceded in death by his sister, Delorse Howard and by his brother, Walter Lavelle Emmons. He is survived by his loving wife of 53 years, Marilyn Linney Emmons and by his children, Jason Emmons and wife, Katrina Emmons, of Bulverde and Farrah Drury and husband, Rich Drury, of Sealy. He is survived by brothers, Robert Emmons and Wilford Emmons, DeRidder, LA and by Don Ray Smith, Montgomery. He was a loving Pops to five wonderful grandchildren, Levi Emmons, College Station; Lexi Emmons , Houston; Tanner Hall and Spencer Hall, Bulverde; and Jakobe Drury, Sealy. Serving as pallbearers are Rich Drury, Levi Emmons, Hector Gutierrez, Tanner Hall, Marvin Preuss and Clarence Wolfshohl. Honorary pallbearers are Jakobe Drury, Lexi Emmons and Spencer Hall. Our sincere thanks to the staff at Altus Hospice for their kindnesses and concern during this season. Special thank yous to our special angels, Veronica Rhoads and Linda Aitsebaomo. In lieu of flowers donations may be made in Melvin’s memory to New Covenant Fellowship, P.O. Box 257, Rosenberg, Texas, or to the charity of your choice.

After a 27 month bravely fought battle against brain cancer (glioblastoma) Melvin passed into the arms of our Lord on Thursday, February 4, 2021. He was born September 24, 1943 in Merryville, Louisiana to Walter Emmons and Irene Smith Emmons... View Obituary & Service Information

The family of Melvin Levi Emmons created this Life Tributes page to make it easy to share your memories.

After a 27 month bravely fought battle against brain cancer (glioblastoma)...

Send flowers to the Emmons family.