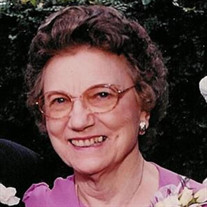 Lillian Martha Luedeke Prebilsky, 98, passed away on April 16, 2021 in Houston, Texas after a long illness. Lillian was born on October 23, 1922 to Lillie and Adolf Luedeke at the family farmstead near the Village of Pleak, Texas. She would tell the story that she was not breathing when she was born, and the doctor had to be called. “He came and hit me, and I started breathing. And I still am!” she said 98 years later. Lillian grew up on the family farm with her siblings Hilda, Ella, Adolph, and Eddie, and with her heritage, it was not surprising that the first words she ever spoke were in German. Affectionately called “Lolly,” she grew up playing and working in the barnyard, fields, and farmhouse, contributing along with everyone else with the daily farm chores. She learned much from her sisters about what girls should learn and from her brothers what a tomboy should learn. She always said that growing up on the farm made her tough. She was proud of being a very fast runner and always claimed that she outran not only all the girls but also all of the boys in school. She graduated from Rosenberg High School in Rosenberg, Texas in 1940. Lillian married Joe Prebilsky of Rosenberg at the Fort Bend County courthouse in Richmond, Texas on November 27, 1944, while he was on leave from the U. S. Army Air Corps following his return to the States from Europe. No one is certain whether he outran her or if she may have thrown that race. She enjoyed recalling how they celebrated that night with family and friends, dancing to Bob Wills and the Texas Playboys at The Plantation night club in Houston. During WWII, while Joe was stationed at a series of military bases in the U.S. and England and flew 29 combat missions in Europe, Lillian worked as a machinist making drill bits for oil rigs at Hughes Tool Company in Houston. After the war they settled in Houston, and in 1947 she became a stay-at-home mother when she gave birth to Gary, with Wayne and Leslie following. The family lived in southeast Houston in a house built by her father and brother Adolph, and wired by Joe, until moving to the Pearland area in 1962. Lillian loved being a Mom and raising her sons, baking family recipes of bread and kolaches, and spending time with family and friends. The Luedeke and Prebilsky family trees grew and spread, but all brothers, sisters, their spouses and nieces and nephews remained close through the years. After Joe’s retirement as an electrician in 1979, he and Lillian enjoyed babysitting their grandsons Ronnie, Joel, and Gary Brandon, and dancing in several dance clubs in the Rosenberg area, often rekindling friendships from their youth. They traveled the country on sightseeing trips with siblings, and to annual reunions of Joe’s 390th Bomber Group. Lillian particularly enjoyed playing the slots at casinos in Las Vegas and Louisiana. They celebrated 63 years of marriage before Joe’s passing in 2008. Blessed with longevity, after Joe’s death Lillian continued to live in her beloved home, and to insist on cooking meals for family gatherings, until she was nearly 98. Lillian is preceded in death by her husband Joe Prebilsky; her parents, Adolf and Lillie Luedeke; and her siblings Hilda Blahuta, Ella Scharnberg, Adolph Luedeke, Jr., and Edward Luedeke. She is survived by her sons and daughters-in-law Gary and Denise Prebilsky, Wayne and Vicki Prebilsky, and Leslie and Theresa Prebilsky; three grandsons, Ronnie Prebilsky, Joel Prebilsky and Gary Brandon Prebilsky; and numerous other relatives. The family would like to thank the nurses and staff of Park Manor of South Belt and Heart to Heart Hospice for their care of Lillian in her final months and days. Visitation will be held from 1-2 p.m. at Davis-Greenlawn Chapel in Rosenberg, Texas, with Celebration of Life service at 2 p.m. Interment will follow at Greenlawn Memorial Park in Rosenberg. In light of the pandemic, the family urges everyone to honor their individual comfort for personal safety. For those wishing, in lieu of flowers, memorials may be made to Disabled American Veterans www.dav.org; the 390th Memorial Museum www.390th.org; or the charity of one’s choice.

Lillian Martha Luedeke Prebilsky, 98, passed away on April 16, 2021 in Houston, Texas after a long illness. Lillian was born on October 23, 1922 to Lillie and Adolf Luedeke at the family farmstead near the Village of Pleak, Texas. She would... View Obituary & Service Information

The family of Lillian Luedeke Prebilsky created this Life Tributes page to make it easy to share your memories.

Send flowers to the Prebilsky family.