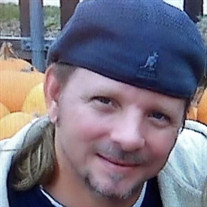 Leonard "Wayne" Hudgins Jr. was born July 17, 1965 and entered into his eternal heavenly home September 11, 2021 at the early age of 56 after a long and hard fought battle with Covid Pneumonia complications. Wayne (Waynehalen), as he was known by everyone, was the middle child of Leonard Wayne Hudgins Sr. and Patsy Hudgins (Manning), who both preceded him in death. A very sweet, selfless, humble, and Godly man. To say Wayne was unselfish doesn't even begin to describe this man and his character. He is survived by the love of his life, best friend, soulmate and the woman he called his first and only love, his wife of 14 years Michelle Wilson Pazar. They met in 2007 and it was as they say "love at first sight" and were inseparable ever since. He dedicated the last 15 years of his life to the well being and caring of his family stepchildren Brandon Michael Pazar, Kaleb Kody Pazar and daughter Zoe Danae DeLeon and fiancee (James JJ Vasquez)and one grandson Elijah "Eli" Pazar. Also leaving behind sister Shawn McKinley (Hudgins) , brother Greg Hudgins, two half sisters Amanda and Cindy. Nieces Charlotte McKinley, Claire Hudgins, Julia Hudgins and Anna Hudgins. Aunt Becky Manning and numerous cousins and friends that were very dear to his heart. Wayne in his early years enjoyed going out to rock clubs spending time with his many friends going to concerts and just having a good time. He never met a stranger and everyone he ever met instantly loved him and became his friend. He was known as "nationwide" for many years because he had friends everywhere and went everywhere. The nickname that really stuck was "waynehalen" that was given to him by his friend Cole. Before they became friends Cole had seen Wayne riding on a skateboard delivering pizzas and he thought it was David Lee Roth so he had to go and see why David Lee Roth was delivering pizzas on a skateboard, he yelled out "Hey Halen". From then on he got his nickname "Waynehalen". He loved riding his Harley and driving and collecting muscle cars. Wayne was the kind of man that would go out of his way to help his friends or family with anything they needed and would drop anything to help if need be. He was one of a kind and had a heart of gold. He spent the majority of his life in the silk screen printing business. Chances are you may own or have worn a t-shirt printed by Wayne. He loved going to the beach and the river and enjoyed the outdoors and nature. He met the love of his life, his wife Michelle in 2007 and that changed his life forever. Shortly after they met he stopped going to nightclubs, drinking and became a very loving and devoted family man and father. There was nothing that he wouldn't do for Michelle and her 3 kids. He had given his life to God in recent years and started his business Christ For Life Apparel. His goal was to reach as many people as possible and spread the love and word of God. Wayne spread his passion for life and love of man throughout his lifetime. It's impossible to name each man and woman that played a part in Wayne's life. Throughout his short life on this earth, Wayne inherited the hearts of THOUSANDS. He was a simple, down to earth and truly loving man. He loved making people laugh and just had a positive outlook on life know matter what the circumstances. He will be missed for more things than anyone can imagine. Especially by his daughter Zoe and his wife Michelle that lost the love of her life way too soon and very unexpectedly and will mourn his loss until they meet again someday in heaven. There is a GoFundMe account set up for the family of Wayne. Wayne had no life insurance and Michelle and Zoe are asking anyone that wishes to donate to please do so in lieu of sending flowers etc. https://gofund.me/678fc9fb Tributes and words of condolence may be left for the family at www.davisgreenlawnfh.com. Arrangements are under the direction of Davis-Greenlawn Funeral Home, 3900 B.F. Terry Blvd., Rosenberg, Texas 77471, Phone: 281-341-8800.

Leonard "Wayne" Hudgins Jr. was born July 17, 1965 and entered into his eternal heavenly home September 11, 2021 at the early age of 56 after a long and hard fought battle with Covid Pneumonia complications. Wayne (Waynehalen), as he was known... View Obituary & Service Information

The family of Leonard Wayne Hudgins created this Life Tributes page to make it easy to share your memories.

Send flowers to the Hudgins family.