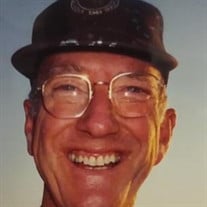 . Lee Lon Harvill passed peacefully into the arms of his Loving and much Revered Lord and Savior March 22, 2021. He was a giant of a gentleman and loved serving his Lord, devoted to his family, country and friends. He could repair most anything and loved doing so for anyone who could use his help. He was a great story teller and enjoyed talking with anyone who would listen! He was born in Nueces County, Robstown, TX to Robert Sebran and Fannie Nunley on February 12, 1930. He grew up in South, TX, graduated from Sinton High School, attended Texas A&I (now A&M) where he later taught; also attended and taught at the University of Houston; taught at Rutgers University in Camden, NJ and received his PhD from UCLA, Los Angeles on a Scholarship from same. He loved the outdoors and his Geology degrees provided much opportunity for this. Lee also served his country during the Korean Conflict. After many years in the educational field he began working at Gulf Oil and merged with the Chevron/Gulf merger, having retired from Chevron in 1992. He was always interested in passing along his vast knowledge to his family and friends. He was married to Betty Beall and from this marriage were Cindy Hosea (Roger) and Bruce T. Harvill (Linda). Their family grew into 4 grandchildren: Alissa (Raymond), Samantha (Bebe), Shana, and Tyler(Kellsey). There are now 13 great grandchildren. Daughter Cindy had this to say about her Father “Dad had a strong dedication to family, whether immediate, extended, work, or church family and taught all of us to have a strong family bond. He was a role model and strong supporter for all. He exemplified the importance of and how to truly have a strong work ethic and truly enjoy your life’s “Calling.” Bruce had this to say about his Dad, “The world has lost a great man. To many he was a leader, a teacher, a mentor and a scientist. He was all of those and more but to us he was a Dad, a Grandfather, a Great Grandfather. Dad taught me how to whittle a piece of wood for no reason at all. Dad taught me that Spam only tastes good when covered in Pace Picante Sauce. My Dad taught me how to laugh, especially at myself. But most of all he taught me how to care about my fellow man...and for that, he was my Hero.” Lee was predeceased by his wife Betty and two brothers, Bob and Martin Harvill. Surviving are his wife of 28 years Erma Jordan Harvill. Visitation is at 1:00 pm, followed by the funeral service at 2:00 p.m. Both are at First Baptist Church, Richmond, TX. Graveside service follows immediately at Greenlawn Memorial Park in Rosenberg, TX. Officiating will be Drs. Randy Hatchett and John Lockhart. Kermit Mc Carver will serve as Honorary Pallbearer. In lieu of flowers, if you choose to, donations may be made to First Baptist Church, 502 S. Fifth Street, Richmond, TX 77469 or a charity of your choice.

. Lee Lon Harvill passed peacefully into the arms of his Loving and much Revered Lord and Savior March 22, 2021. He was a giant of a gentleman and loved serving his Lord, devoted to his family, country and friends. He could repair most anything... View Obituary & Service Information

The family of Lee Lon Harvill created this Life Tributes page to make it easy to share your memories.

.
Lee Lon Harvill passed peacefully into the arms of his Loving...

Send flowers to the Harvill family.