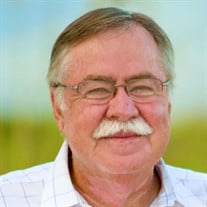 Kelly Robert Kaluza, a beloved husband, father, grandfather, brother, son and friend died peacefully on May 9, 2022 at the age of 72. He was born August 21,1949 in Richmond, Texas, to the late Edwin Jerry (EJ) and Mary Lee Kaluza. He grew up in Fairchilds, Texas, and graduated from Needville High School. As a kid, you would find Kelly in the cotton fields helping on his family farm. After graduating high school, he married Jerry Anne Steinkamp, his high school sweetheart, and they left for Austin where he attended the University of Texas at Austin. He graduated, with honors, in Petroleum Engineering in 1971. He was an avid and lifelong Texas Longhorn fan. After a brief stint in petroleum engineering, Kelly opened the doors to his civil engineering and surveying business and hung the sign “Kelly R. Kaluza and Associates, Inc.” For almost 40 years, Kelly proudly led the design of countless projects spanning numerous counties, and he was the city engineer for several municipalities. Kelly considered his employees family and made lifelong friendships with his clients. He loved to fish and hunt. In the late 80s, Kelly and Jerry Anne bought a ranch in Brackettville, Texas. This was his favorite place. In those early years, he spent countless hours with Jerry Anne, his parents, brother, sisters, nephews, friends, colleagues — anyone willing to make the 5 hour drive on a Friday night. In years following, he successfully had his daughters, sons-in-law and grandsons hooked on the ranch. Over the last several hunting seasons, you would find Kelly bundled in a deer stand with as many of his grandsons who could fit but not before he destroyed the kitchen making trays of cinnamon toast! He and Jerry Anne enjoyed weekend gambling trips with their dear friends Ren and Sharon Davis. Kelly was a devoted father. Moreover, he lived for his grandsons Jack, Luke, Logan and Cotton. Kelly was known as “Bucky” to them (and eventually to many others). When he wasn’t spending time with his grandsons at the ranch, he would be their loudest fan at sporting events, teacher of all things (some not always appropriate) and best friend. He also found delight with his granddogs! He loved people. He never met a stranger. He was patient. He was generous. He was smart. He was kind. He looked forward to every hug. In fact, when he didn’t get that hug you’d often hear “What did you forget to do today?” Kelly is survived by the love of his life and wife of 53 years, Jerry Anne Kaluza; daughters Natalie Janik and husband Paul, Christie Dull and husband Chris; grandchildren Jack Janik, Luke Janik, Logan Janik, Megan Dull and Cotton Dull; sisters Carol Zahradnik and husband Eddie, Marilyn Buchta and husband Mark; sister-in-law Linda Kaluza and many nieces and nephews. He is preceded in death by his parents EJ and Mary Lee Kaluza, brother Gary Kaluza and nephew Keith Zahradnik. In lieu of flowers, consider donating to the KZ (Keith Zahradnik) Jamboree, supporting mental illness awareness. (Mailing address is 13451 Linden, Sugar Land, Texas 77498.) Kelly’s services will be held at Davis-Greenlawn Funeral Chapel in Rosenberg, Texas on Monday, May 16, 2022. Visitation begins at 9:30 a.m., services at 11 a.m. and lunch reception immediately following. Pallbearers will include Jack, Luke and Logan Janik, Cotton Dull, Llarance Turner and Troy Burditt. Honorary pallbearer will be Ren Davis. Tributes and words of condolence may be left for the family at www.davisgreenlawnfh.com. Arrangements are under the direction of Davis-Greenlawn Funeral Home, 3900 B.F. Terry Blvd. (Hwy 59 South @ FM 2218), Rosenberg, Texas 77471, Phone: 281-341-8800.

Kelly Robert Kaluza, a beloved husband, father, grandfather, brother, son and friend died peacefully on May 9, 2022 at the age of 72. He was born August 21,1949 in Richmond, Texas, to the late Edwin Jerry (EJ) and Mary Lee Kaluza. He grew... View Obituary & Service Information

The family of Kelly Robert Kaluza created this Life Tributes page to make it easy to share your memories.

Send flowers to the Kaluza family.