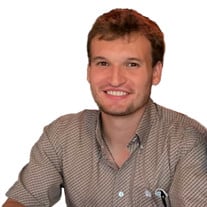 Kane Quincy Wieghat was born October 2, 2000 and was carried by God to his eternal home on February 21, 2022. Kane was preceded in death by his “PoPo” Stanley Grawnoski, “PoPo” Lawrence Henry (Pete) Wieghat and “Nana” Mary Lee Grawnoski. He is survived by his loving parents, Scott and Tammy Wieghat and sister Kyla Quinn Wieghat; “Grandma” Dorothy Wieghat; aunts and uncles, Rodney and Darlene Wieghat, Timmy and Jennifer Wieghat, Carlton and Chriss Wieghat, Mike and Terry McColloch, Gary Grawnoski and Chris Maxa, Bobby and Cathy Orsak along with many cousins and many close friends who were so dear to his heart and kept him going. Kane was an amazingly strong, talented athlete with an infectious smile and the warmest spirit to match it. He was a fierce competitor in Football, Baseball, Basketball and Track. He was a warrior in the weight room. He always sought perfection in everything he did. Any sport he played, he gave over 100% of himself and it showed. Winning district with track was one of Kane’s proudest moments but every trophy, metal, ribbon, and certificate, were all great accomplishments for him. Kane also showed animals at the Fort Bend County Fair and Needville Youth Fair where numerous awards and buckles were proudly won. Kane was the most hard-working kid we knew, who would choose work over play any day of the week. In May 2019, Kane’s life took a significant turn as he suffered a traumatic brain injury. From that moment, he was focused and fought courageously to make a comeback to where his mind was before the accident. He was constantly researching brain injuries and the latest treatments. His family supported every effort to find a cure. In typical Kane fashion, he was willing to do anything to recover. He never gave up trying to get better. Kane fought tirelessly through treatments, even those he did not like. Kane would do whatever was humanly possible, to get back to where he desperately wanted to be in his mind. Even though he often did not feel it within himself, his family was continually impressed at how sharp he stayed throughout his struggles. Kane loved God and deeply loved his family. He greatly admired his father’s work ethic and emulated it in his life. He also inherited his mother’s tenacity. His sister, Kyla was one of the dearests to his heart. Kane was loved by his many, many friends and he loved to laugh and talk about the good times with all of them. Kane stayed physically strong and tough as nails throughout it all. He focused what he could control by staying athletic and physically fit. We know Kane will never stop looking over us and his friends. His final written words were, “When you need strength just call out to me and I will give you everything I got.” Kane was an organ and tissue donor. This act of kindness will be a blessing to over two hundred people. Helping others, being kind, and so very polite was at the core of everything Kane was. The depth of his love for others was a source of great pride to his family. God has a true jewel with him now and peace is within us knowing his beloved Nana was first in line to lead him home where he is finally free from his pain and is eternally at peace. A visitation for Kane will be held Wednesday, March 2, 2022, from 5:00 – 8:00 PM at Davis-Greenlawn in Rosenberg. Funeral services will be at St. Michael’s Catholic Church in Needville on Thursday, March 3, 2022, at 10:00 AM with burial services at Morton Cemetery in Richmond. In lieu of flowers, please consider like Kane, in helping others live a more fulfilling life by becoming an organ donor.

The family of Kane Quincy Wieghat created this Life Tributes page to make it easy to share your memories.

Send flowers to the Wieghat family.