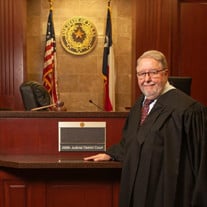 Judge Donald W. Bankston, 73, of Richmond, passed away on March 24, 2021. Born and raised in Dallas, Judge Bankston left his hometown to pursue a law degree at the University of Houston. He went private practice in Houston and then moved to Richmond in 1984 as a young lawyer to raise his family. During the first half of his career, Don served as a prosecutor with the Fort Bend County District Attorney’s Office. Over the next half of his career, Don became a local legend in private practice, known for his uncompromising defense of constitutional rights, his battles against police brutality and corruption, and his fierce stands against prosecutorial overreach. He was also a pioneer in the fight to keep junk science out of the courtroom. Don was also well known as a lifelong community activist and a foundational figure in creating the local Democratic Party. In the GOP-dominated 1990s, Don began the long process of organizing a local party from scratch, and for the next 30 years, he labored tirelessly for the ideals he was so passionate about. To his peers in politics, he was variously known as a true believer, a troublemaker, a negotiator, a rabble-rouser, and a steadfast mentor to a generation of public servants. During the last years of his life, Judge Bankston was deeply honored to preside in the 268th District Court, a privilege he undertook with great sincerity. Judge Bankston was kind, sympathetic, and accommodating to every party who entered his courtroom, except perhaps to the attorneys representing banks seeking to foreclose for minor HOA fee delinquencies in the midst of a pandemic. His rebuke of these banks was a point of personal pride. Don is survived by his wife of 50 years, Susan DuQuesnay Bankston, a former teacher, journalist, political humorist, and currently semi-professional grandma, his son Bryan Bankston, a veteran and an artist who works at the Fort Bend County Libraries, his son Mark Bankston, a plaintiff’s lawyer, his daughter-in-law Elizabeth Eakin, an environmental prosecutor, and his grandson Benjamin Bankston, his best buddy in the whole world. Don will be joining his departed son Chip Bankston on the other side, where they can watch Astros games while wearing Hawaiian shirts and reminiscence about riding in the MS-150. The family plans to announce a public service soon when gatherings become safer. Condolences can be sent to Mark Bankston, Farrar & Ball, LLP, 1117 Herkimer St, Houston, TX 77008. Donations are suggested to the Autism Society of Texas or the Juanita Jean PAC on Act Blue to keep making good trouble.

Judge Donald W. Bankston, 73, of Richmond, passed away on March 24, 2021. Born and raised in Dallas, Judge Bankston left his hometown to pursue a law degree at the University of Houston. He went private practice in Houston and then moved to... View Obituary & Service Information

The family of Judge Donald Wayne Bankston created this Life Tributes page to make it easy to share your memories.

Judge Donald W. Bankston, 73, of Richmond, passed away on March...

Send flowers to the Bankston family.