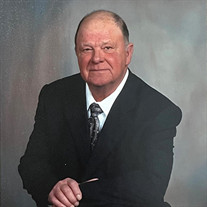 Joseph “Jody” Duyka, 76, of Needville, passed away Thursday, February 11, 2021 peacefully in his home after spending precious time with his family. He was born August 4, 1944 to Joe and Lillian Duyka in Wharton where he attended Catholic elementary school, Wharton High School, and served as FFA president at the local, district, and area levels. He attended WCJC, and years later, Durham Business College majoring in business and computers. He was first employed by JD Hudgeons in Hungerford before taking a job with Houston Lighting and Power. In 1964, he married his sweetheart from Needville, Ladele Frances Stavinoha, and owned Jody’s Exxon Service at the corner of Main and Austin Streets where the building remains today. In 1970, he joined the family business, Lad-Pak, where he spent the next forty years and often boasted that he made over 5 million pounds of Award-winning smoked sausage. Jody enjoyed fishing, playing golf, and collecting coins. He loved spending time with his family at home and on the farm, camping across Texas, relaxing in Matagorda, and caring for his cows. He enjoyed fun adventures to casinos, putting together many puzzles, and cars – “fast cars”. Jody was a member of St. Michael’s Catholic Church and served on the parish council and as a lector and usher. He participated in the Knights of Columbus on both the Needville and Wharton councils where he held many offices including Grand Knight and Trustee. Jody was a member of the Needville Lions Club and Needville Chamber of Commerce, on the advisory board of Prosperity Bank, and an honorary member of the Needville FFA. Jody supported the Needville Youth Fair every year purchasing animals from the youth in the community. He was a volunteer fireman for over twenty years and served as Assistant Fire Chief. Survivors include his wife of 56 years, Ladele Stavinoha Duyka, daughter Venessa Grandjean and husband Phil, daughter Donna Barfield and husband Jeff, brother Tim Duyka and his wife Mary, and 5 grandchildren: Philip Grandjean, Valerie Grandjean, Paige Grandjean, Kayla Barfield and Erica Barfield. He will be missed by many including the Romeo Club (Retired Old Men Eating Out) who could be found at their favorite table together many weekdays at noon. He was preceded in death by his parents, his sister Sandy Wenzel, and other dear family members and friends. There will be a visitation Sunday, February 21, 2021 from 1-4 P.M. with a rosary at 3:00 P.M. in the Chapel at Davis Greenlawn Funeral Home in Rosenberg. The Funeral Mass will be held Monday, February 22, 2021 at 10:00 A.M. at St. Michael’s Catholic Church in Needville with Jody’s childhood friend, Monsignor Dan Scheel, officiating. Pallbearers will include: nephews Dean Stavinoha and Matthew and Mark Hartfiel; his dear friend’s sons Wyatt and Wade Bosse, and his Matagorda buddy, David Lackey. Honorary pallbearers include the handsome men from the Romeo Club. The burial will take place immediately following at Davis-Greenlawn. There will be social distancing and masks required at both occasions. For those unable to attend due to Covid restrictions, the funeral mass will be livestreamed on Facebook at “St. Michael’s Needville”, and there will be no social gathering after the funeral. In lieu of flowers, the family respectfully requests donations to be made to St. Michael’s Catholic Church or to the COPD Foundation at www.copdfoundation.org in memory of Jody Duyka. Notifications should be directed to Ladele Duyka at [email protected] . Words of condolence may be left for the family at www.davisgreenlawnfh.com. Arrangements are under the direction of Davis-Greenlawn Funeral Home, 3900 B.F. Terry Blvd., Rosenberg, Texas 77471, Phone: 281-341-8800.

Joseph &#8220;Jody&#8221; Duyka, 76, of Needville, passed away Thursday, February 11, 2021 peacefully in his home after spending precious time with his family. He was born August 4, 1944 to Joe and Lillian Duyka in Wharton where he attended... View Obituary & Service Information

The family of Joseph Jody Duyka created this Life Tributes page to make it easy to share your memories.

Send flowers to the Duyka family.