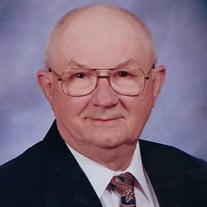 John Henry “Johnnie” Viktorin John Henry "Johnnie" Viktorin was born on October 21, 1934 to Henry and Mary (Prazak) Viktorin in East Bernard. He attended Holy Cross Catholic School, East Bernard High School (graduating in 1952), and WCJC. After helping his parents with farming operations, he and his father established East Bernard Milling Company in 1954, an agri-business company. In June 2000, after being in the business for 46 years, Johnnie sold the firm and retired to live out his ranching dreams. In 1954 at the age of 19 Johnnie was involved in a fishing accident near Freeport, Texas. While on a charter boat out of Freeport with 15 family members, the boat began to take on water and sank. The group was in the water over 2 hours using the few life jackets available and shirts to make "balloon-type" preservers to keep afloat. They were finally rescued by a shrimp boat, aptly named "Retriever". A family member, Bill Vacek, son of Rudolph & Lucie Vacek, sadly perished in the accident. Johnnie served in the National Guard of Texas Army Reserves from June 1957 to April 1963. He married Martha Fajkus on April 13, 1958, daughter of John and Carrie (Chalupa) Fajkus. They first resided in Rosenberg, but soon moved to their permanent hometown of East Bernard where they raised their three children, Patsy, Janice, and Russell. Johnnie was a huge fan of East Bernard athletics, especially Brahma football. He faithfully rooted for his children, grandchildren and all EB sports participants. He never missed Friday night lights as long as his health allowed. He greatly enjoyed travelling with close friends all over the US and Europe as well as his occasional casino trips. In 1987, Johnnie and Martha purchased property in Lavaca County in fulfillment of Johnnie’s ranching dream. They built a weekend home there and commenced turning the property into a top notch cattle ranch. The entire family spent many happy hours at "Circle Oaks Ranch" deer hunting, hog hunting, fishing in the 3 stocked ponds and enjoying family and the outdoors. Johnnie dearly loved his children, grandchildren and great-grandchildren. He loved polka and waltz music, and he was a great dancer. He was a man of character and high moral integrity and was admired by those who knew him. His examples of hard work and sacrifice will remain as a great legacy. Johnnie is survived by his wife of 63 years, Martha; daughter, Patsy Gertson and husband Ronald; daughter, Janice Polak and husband Raymond; son, Russell Viktorin and wife Jackie; 9 grandchildren; 16 great grandchildren; sister Mary Ann Morse and husband Joe; brother Dennis Viktorin and wife Dianne; brother Daniel Viktorin and wife Kathy; sister-in-law Gladys Viktorin; and numerous nieces, nephews, and relatives. Johnnie was preceded in death by his parents Henry and Mary (Prazak) Viktorin, brother Henry Viktorin and nephew Jeffrey Viktorin. Johnnie was a faithful member of Holy Cross Catholic Church, Knights of Columbus and the KJT. In lieu of flowers, donations may be made to Holy Cross Catholic Church, P. O. Box 1325, East Bernard, TX 77435 or KJT Society No. 40, P. O. Box 26, East Bernard, TX 77435 or the charity of your choice. Tributes and words of condolence may be left for the family at www.davisgreenlawnfh.com. Arrangements are under the direction of Davis-Greenlawn Funeral Home, 3900 B.F. Terry Blvd., Rosenberg, Texas 77471, Phone: 281-341-8800.

The family of John Henry Viktorin created this Life Tributes page to make it easy to share your memories.

Send flowers to the Viktorin family.