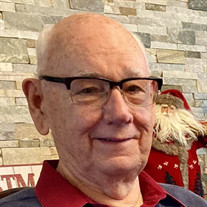 John L. Pavlock, 83, of Rosenberg, TX, passed away on December 22, 2021 after complications from a stroke. John was born on September 16, 1938 in Beasley, TX to Tony and Verna Pavlock, who both preceded him in death. After graduating from Lamar Consolidated High School, John went to work for the Texas Department of Transportation, where he worked for over 40 years until retirement. He was also a proud 8 year member of the Texas National Guard. In 1963 he met his future wife, Shirley, at a pick-up basketball game. Shirley was the love of his life, and John and Shirley were married in 1964 and soon after had 2 daughters, Natalie and Wendy. They were happily married for 57 years. John was a lifelong member of Holy Rosary Catholic Church and was strong in his faith. He was an active member of the Knights of Columbus for 47 years and a 3rd Degree Knight. John was also a member of SPJST, Catholic Life, Young at Heart, and an officer in Hermann Sons Life. John was an avid sports fan. He loved all sports, but especially enjoyed watching college football. Playing dominos, bingo, and spending time with his family and friends were important to him. He also loved trips to Coushatta and playing Texas Hold’em. John is survived by his wife Shirley Grigar Pavlock; daughter Natalie and her husband Greg Meadlin; daughter Wendy and her husband Pat Perry; and 5 grandchildren: Cole Meadlin, and Blake, Christopher, Emily and Annie Perry. He will forever be in their hearts and missed dearly. A Rosary Vigil will be held on Wednesday, December 29th at 6:30 pm at Marion Hall at Holy Rosary Catholic Church. Visitation will begin at 5:00 pm preceding the Rosary. A funeral Mass will be held on Thursday, December 30th, at 10:00 am at Marion Hall at Holy Rosary Catholic Church. Burial will immediately follow at Davis Greenlawn Cemetery. In lieu of flowers, donations may be made in John’s memory to Frassati Catholic High School at frassaticatholic.org or to your favorite charity.

John L. Pavlock, 83, of Rosenberg, TX, passed away on December 22, 2021 after complications from a stroke. John was born on September 16, 1938 in Beasley, TX to Tony and Verna Pavlock, who both preceded him in death. After graduating from... View Obituary & Service Information

The family of John L. Pavlock created this Life Tributes page to make it easy to share your memories.

Send flowers to the Pavlock family.