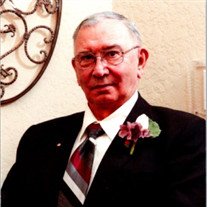 John Alois Ondrush, Sr. passed away on January 1, 2022 at the age of 73. John, also known to those close to him as “Ole Bear” or John the “Telephone Man”, was born on January 27, 1948 in Mahnomen, MN to Alois and Mary Ondrush. John grew up on a farm in Gary, MN and graduated from Gary High School in 1966. After he graduated from high school he enlisted in the Army and spent most of his time in the military stationed in Korea where he worked as an Aviation Technician. After his time in the Army was over, he went to work for Northwestern Bell in Detroit Lakes, MN. John then soon married his long time sweetheart, Mary Ann Kaiser, on September 6, 1969 and later became the proud father to 5 wonderful children. John and his family continued to live in Detroit Lakes until his job brought him and his family to Rosenberg, TX in 1982 working for Southwestern Bell which later became AT&T. In 2009, he retired from AT&T after 40 dedicated years of service. After retirement he worked an additional 10 years with his good friends at Urbish Electric. Once John and his family moved to Rosenberg, they became longtime parishioners of Holy Rosary Catholic Church where he routinely served as an Usher. He was a dedicated family man who enjoyed spending time with his family such as coaching softball, taking the family on summer camping trips and teaching his children how to hunt and fish. John enjoyed the outdoors. He was an avid Hunter spending much of his free time hunting and camping. He also enjoyed fishing and archery and even spent some time as the President of the Fort Bend Archery Club. John’s memory will be cherished and kept alive by his childhood sweetheart and wife of 52 years, Mary; his children Jennifer, John Jr, Jeff, Janell, James and their spouses; his grandchildren Celeste, Justin, Collin, Natalie, Allison, Brittney, Mackenzie, Madison and Hunter; his brother Steve; and his many friends. In lieu of flowers the family requests donations to the Holy Rosary Statue Fund. Visitation will be held from 5:00 p.m. – 8:00 p.m., Monday, January 10, 2022 in the Chapel of Davis-Greenlawn Funeral Home in Rosenberg. A rosary will be recited at 7:00 p.m. The funeral mass will be celebrated at 10:00 a.m., Tuesday, January 11, 2022 at the Joerger-Lindsay Parish Hall of Holy Rosary Catholic Church in Rosenberg. Fr. Orrin Halepeska to officiate. Burial, with military honors, to follow at Greenlawn Memorial Park in Rosenberg, Texas. Tributes and words of condolence may be left for the family at www.davisgreenlawnfh.com. Arrangements have been entrusted to Davis-Greenlawn Funeral Home, 3900 B.F. Terry Blvd., Rosenberg, Texas 77471, Phone: 281-341-8800.

The family of John A. Ondrush created this Life Tributes page to make it easy to share your memories.

Send flowers to the Ondrush family.