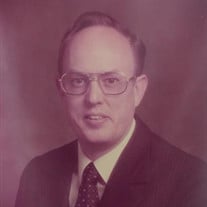 John Henry McConnell, 83, of Rosenberg, Texas, passed away on December 8, 2020. He was born on February 26, 1937 in Nacogdoches, Texas to Mack and Birdie May Mangum McConnell. John attended Lamar High School in Houston, Texas and was a graduate of the Class of 1955. He received a BS in Mechanical Engineering from the Cullen College of Engineering at The University of Houston. John had a lifelong career of generating electrical power with Houston Lighting and Power. He was highly respected as he helped grow HL&P by assisting in the design review and start-up of multiple large generating units. He began his career in 1959 as a Lab Technician at the Deepwater Plant near Deer Park, TX and then as a Results Engineer at the S. R. Bertron Plant in La Porte, TX. He continued his career in management as Assistant Plant Superintendent at the P. H. Robinson Plant in Bacliff, TX. In 1970, he was promoted to Plant Superintendent at the W. A. Parish Gas Plant in Thompson, TX. John retired as Technical Manager of the W. A. Parish Coal Plant in 1992. In 1957, John married the love of his life and best friend, Gwen. Throughout their lives together, John and Gwen enjoyed snow skiing, water skiing, and especially enjoyed sitting around a campfire or bonfire during the many years of vacationing with their family. Together they shared their love of nature through traveling. After his retirement, RV traveling took them to the far reaches of the United States including the end of the highway in Alaska. John’s times around the campfire with his buddies, coworkers and sons at hunting camp were great memories for him as well. His favorite hobby was repairing anything to perfection, especially anything mechanical. John and Gwen became members of St. John’s United Methodist Church of Richmond in 1971. He served on multiple committees and boards at St. Johns including ushering and home visits to new members. Words often conveyed to describe John McConnell, from his Lamar High School yearbooks to today’s heartfelt condolences, include: intelligent, kind, fair, honest and loved. John is preceded in death by his parents, his sister, Joyce Jean McConnell, and his brother, Mark Edward McConnell. Survivors include his wife of 63 years, Gwendolyn Joan Webb McConnell and their children: Michael McConnell and wife, Jocelyn of Sugar Land, TX ; Roger McConnell and wife, Jimaree of Magnolia, TX ; Cindy Rotzler and husband, Kenny of New Braunfels, TX; and Shaun McConnell and wife, Jennifer of Orange, TX. John felt blessed by their grandchildren: Cory McConnell; Chase McConnell and wife, Paloma; Kaitlyn Elkins and husband, Brazos; Amy Rotzler and husband, Kyle Abercrombie; Kelly Rotzler Leber and husband, Nathan Leber; John Charles McConnell and wife, Haleigh; Ashley Corder and husband, Troy; Lane McConnell (Faith Buschardt); and Madison McConnell. John is also survived by 11 great grandchildren: Jewel McConnell, Maci McConnell, Jack Rotzler, Kinley Abercrombie, Alexander Leber, Ryland Gaskin, Olivia McConnell, Noah Granger, Derek Corder, Mason McConnell, and Levi McConnell. John leaves behind his sister-in-law Annette Webb Dunne and her daughters, his dear nieces, Alisa Henley-Sansom and Michelle Brown. A private, family service celebrating John’s life was held at St. John’s United Methodist Church of Richmond, Texas. Interment followed at Greenlawn Memorial Park in Rosenberg with Pastor Jeff Gantz officiating both. In lieu of flowers, the family asks that donations be made in John’s memory to St. John’s United Methodist Church – Memorial Fund, 400 Jackson Street, Richmond, TX 77469. Words of condolence are welcomed by the family at www.davisgreenlawnfh.com

John Henry McConnell, 83, of Rosenberg, Texas, passed away on December 8, 2020. He was born on February 26, 1937 in Nacogdoches, Texas to Mack and Birdie May Mangum McConnell. John attended Lamar High School in Houston, Texas and was a graduate... View Obituary & Service Information

The family of John H. McConnell created this Life Tributes page to make it easy to share your memories.

John Henry McConnell, 83, of Rosenberg, Texas, passed away on...

Send flowers to the McConnell family.