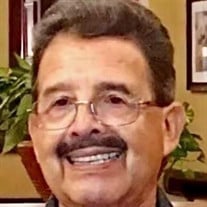 John R. Duran, Jr. went to our Lord in his Heavenly Kingdom on February 28, 2021 at the age of 77. John was a wonderful and devoted son, brother, husband, father, uncle and friend. John was born in Sugarland, Texas to Juan and Eumesinda Duran in June of 1943. The Duran siblings are: Vicente, Maria, Dolores, Teofilo, Jose, Aurora, Martina, Arturo, Pete, Johnny, Angelita, Rosa, Samuel, Hortencia, Lazaro and Gus. John graduated from J. F. Dulles High School in 1961. He married Frances Alderete Duran in July of 1967 and celebrated their 53rd Wedding Anniversary in 2020. John and Frances have four married children and 10 grandchildren: Daughter, Gracie Duran Mendiola, son in law, Roland Mendiola, and grandchildren - Leslie & Rudy. Daughter, Sonya Duran Boyas, son in law Gilbert Boyas, and grandchildren - Anthony, Abigail & Ava. Son, John Duran III, daughter in law, Mandy Duran, and grandchildren - Olivia, Sophia & John. Son, Derrick Duran, daughter in law Melissa Duran and grandchildren - Benjamin & Austin. John has numerous nephews and nieces. John was a hardworking man and had the biggest heart and an infectious smile. He was loving and funny. John was always a source of a story, a joke or a lesson. John’s most influential words were “Primero Dios,” meaning put God first in everything you do and all will be well with you. John was referring to the Bible verse Matthew 6:33, “...Seek ye first the kingdom of God, and his righteousness; and all these things shall be added unto you...” John worked many years in grocery retail stores. He reluctantly retired in 2013 from Sam’s Club. John and Frances were always on the go. They enjoyed socializing with family and friends. They attended many of their grandchildren’s events such as baseball, basketball games, jiujitsu tournaments, music or school concerts, performances and programs. John & Frances also enjoyed traveling with family & friends, creating so many wonderful memories. John was always restless to be productive, so he cut yards for his family and friends. He was relentless and never tired until his illness. John Duran’s legacy is his love and devotion to his wife, his family and friends. My father was fiercely proud of his family. He deemed us all a beautiful blessing from God. Our hearts are broken today as we grieve his loss. John was a living example of a humble, hardworking and grateful servant of God and he will live forever in our hearts. The John Duran, Jr. family greatly appreciates the outpouring of love, support and well wishes from all of our family and friends. The Visitation and Funeral Mass will be at St. Theresa’s Catholic Church, 705 St. Theresa Blvd., Sugarland, TX 77498. Visitation and Rosary: 10:00 a.m. Funeral Mass: 11:00 a.m. Burial at Greenlawn Memorial Park, 3900 BF Terry Blvd., Rosenberg, TX 77471

John R. Duran, Jr. went to our Lord in his Heavenly Kingdom on February 28, 2021 at the age of 77. John was a wonderful and devoted son, brother, husband, father, uncle and friend. John was born in Sugarland, Texas to Juan and Eumesinda Duran... View Obituary & Service Information

The family of John Duran Jr. created this Life Tributes page to make it easy to share your memories.

John R. Duran, Jr. went to our Lord in his Heavenly Kingdom on...

Send flowers to the Duran family.