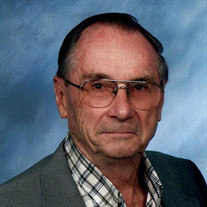 Jerry John Sindel, 88, of Rosenberg, Texas passed away on April 6, 2022 in Rosenberg, Texas. He was born on July 9, 1933 in Rosenberg, the only child of John R. and Alice (Kubala) Sindel. He was a member of Calvary Baptist Church in Rosenberg. Jerry honorably served our country in the U.S. Army. He was a past member of American Legion Post #271. This loving father, grandfather and friend will truly be missed. In addition to his mother and father, Jerry is also preceded in death by his step-mother, Julia (Stabler) Sindel. Survivors include his daughter, Pamela Rogers and her husband, Mark; son, Col. Colin J. Sindel, USAF, Retired and his wife, Laurie; grandchildren, Anthony & Sean Rogers, and John Luke and Avery Sindel; along with extended family and friends. Visitation will be held from 1:00 p.m. until service time at 2:00 p.m., April 15, 2022 in the Chapel of Davis-Greenlawn Funeral Home in Rosenberg. Burial with military honors to follow at Rosenberg City Cemetery. Pastor Nate Sprinkle to officiate the services. For those wishing, in lieu of flowers, donations may be made to the Wounded Warrior Project: https://support.woundedwarriorproject.org/Default.aspx?tsid=11585&ovr_acv_id=16151&campaignSource=ONLINE&source=BS22009AAABRXAA&gclsrc=aw.ds&gclid=EAIaIQobChMIotXN77GD9wIVkytMCh1fagjGEAAYASACEgJYffD_BwE Tributes and words of condolence may be left for the family at www.davisgreenlawnfh.com. Arrangements are under the direction of Davis-Greenlawn Funeral Home, 3900 B.F. Terry Blvd. (Hwy 59 South @ FM 2218), Rosenberg, Texas 77471, Phone: 281-341-8800.

The family of Jerry John Sindel created this Life Tributes page to make it easy to share your memories.

Jerry John Sindel, 88, of Rosenberg, Texas passed away on April...

Send flowers to the Sindel family.