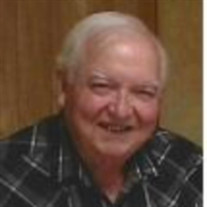 Jerry Lee Haas, 80, passed away Sunday, June 19, 2022, in Rosenberg. He was born in Angleton November 19, 1941, to Fed Nicolas Haas and Edith Macklin Haas. Jerry served his country in the US Army and worked as a welder until his retirement. Survivors... View Obituary & Service Information

The family of Jerry Lee Haas created this Life Tributes page to make it easy to share your memories.

Send flowers to the Haas family.