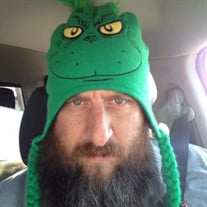 Jeffery Robert Ewing, 55, of Rosenberg, Texas passed away on August 9, 2021. He was born on January 23, 1966 in Kokomo, Indiana to Charles “Chuck” Ewing and Ruby Hunt Fielder. He honorably served our country in the U.S. Army under the 1st Battalion, 55th Air Defense Artillery, 5th Infantry Division. He trained for and received Airborne status as well. Jeff was an avid shooter and enjoyed many outdoor activities such as camping, swimming and kayaking. Being an expert mechanic, Jeff enjoyed riding his motorcycle and the smile it put on Valerie’s face when they rode together. Many knew Jeff as a shock comic; he was always up for a laugh, especially if the joke was on someone else. Over the years, he and Valerie welcomed several Husky dogs into their family. This loving father, grandfather, brother, uncle and friend will truly be missed. In addition to his parents, Jeff is preceded in death by all of his grandparents, several Aunts and Uncles as well as his dear friends, Jessica Hawthorne Young and James “Lance” Brantley. Survivors include his wife of 32 years, Valerie; son, James Robert Ewing and wife Amanda; son, Richard Warren Ewing and wife, Amie Boyd-Ewing; sister, Victoria Leigh Ewing; along with numerous close relatives and friends. Jeff was especially proud to be “Grandpapi” to Tre-Von, Emmi and Willow-Jean and 5 fur grandbabies. Due to COVID-19 Restrictions, there are no services currently scheduled. The family is working on plans for a Celebration of Life Service that will take place when it is safe for friends and family to gather together once more. Tributes and words of condolence may be left for the family at www.davisgreenlawnfh.com. Arrangements are under the direction of Davis-Greenlawn Funeral Home, 3900 B.F. Terry Blvd., Rosenberg, Texas 77471, Phone: 281-341-8800.

The family of Jeffery Robert Ewing created this Life Tributes page to make it easy to share your memories.

Jeffery Robert Ewing, 55, of Rosenberg, Texas passed away on...

Send flowers to the Ewing family.