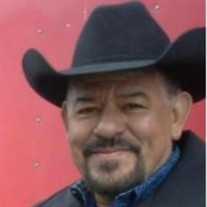 James Martinez, 65, passed away on Saturday, January 29, 2022 in Houston, Texas. He was born on September 13, 1956 in Edinburg, TX to parents Francisco Martinez and Romana Lozano Martinez. He graduated from Dulles High School in 1975 where he played football and was a member of FFA. At a young age, he was given a horse by his dad and that is when his love for horses began. James spent his free time enjoying time with his family, he was a talented musician and played his congas/drums and guitar. He spent time researching his family history and ancestry, he was able to find many family members and update the family tree. He was also involved with the Joaquin Galan family land grant research. Most of all he was a devout Christian and active Bethel church member of over 20 years. He rarely met a stranger and always had a joyful and playful demeanor. He was a member of the Houston Livestock Rodeo Horsepatality Committee for many years, he spent time as a healer (team roper) all over Texas and had many belt buckles in his collection. He enjoyed the annual hunting trip with the Palameros in south Texas. He was an employee of the Quail Valley Utility District. His friendly and funny spirit made him loved by many. James is preceded in death by his parents Francisco Martinez and Romana Lozano Martinez and brother Daniel Martinez. He is survived by his wife Maria; his daughter Catherine (Casey); his brothers Roy (Beva), Frank (Lupe), Eloy; and sisters Rosie (Jesse), Mimi (Robert), Ida (Mike) and Amanda; honorary brothers Donald Ramirez, Howard Ramirez, Jesse Cortez, Lonnie Uresti; many nieces and nephews that he loved and a host of other loving cousins, family members and friends. He will be missed greatly by all those who love him. Visitation will begin at 8:30 a.m. with service to follow at 10:00 a.m. on Thursday, February 3, 2022 in the Chapel at Davis-Greenlawn Funeral home with burial to follow in Greenlawn Memorial Park. Pallbearers will include Adrian Resendez, Blake Farrell, Chas Farrell, Craig Finch, Lawrence Vargas, Michael Flores and Trey Garrett. Tributes and words of condolence may be left for the family at www.davisgreenlawnfh.com. Arrangements are under the direction of Davis-Greenlawn Funeral Home, 3900 B.F. Terry Blvd. (Hwy 59 South @ FM 2218), Rosenberg, Texas 77471, Phone: 281-341-8800.

James Martinez, 65, passed away on Saturday, January 29, 2022 in Houston, Texas. He was born on September 13, 1956 in Edinburg, TX to parents Francisco Martinez and Romana Lozano Martinez. He graduated from Dulles High School in 1975 where... View Obituary & Service Information

The family of James Martinez created this Life Tributes page to make it easy to share your memories.

Send flowers to the Martinez family.