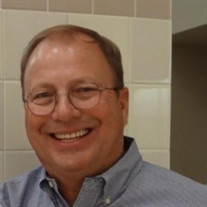 On September 17, 2021, James Richard “Rick” Chappell, 68, went home to be with the Lord. He was born December 29, 1952 in Cotton Valley, Louisiana to J. B. and Maxine Chappell. After graduating from Cotton Valley High School, he became involved in the oil and gas industry. A career change led him to California where he began his roofing career. In 1993, the opportunity for advancement moved him to Houston, Texas where he established the Southwest Regional Office for Sarnafil Roofing Inc. He held many positions in the company and his current title is Manager of Data Centers for Sika Corporation - Roofing. Rick met his future wife, Phyllis, in California and in 1994 they married in Sugar Land, Texas at Williams Trace Baptist Church. In 1999, they were blessed with the addition of their son Sean, and later in 2001 their daughter Rebecca. Rick worshipped faithfully at Sugar Land Baptist Church where he was a Deacon and served in a variety of roles as a Bible Study Teacher, Sound Engineer, and Children’s Church Leader. In addition, he was an avid LSU fan and never missed a football game. His favorite place to take his family was to the Happiest Place on Earth, Disney World. He leaves behind his wife and children, his brother, Randy Chappell and wife Carol, sisters, Jean Cooper, and Anita Williams and husband Kirk, his nieces and nephews Nathaniel, Emily, Meredith, and Trey. As well as several other loving family members and friends. Throughout his life, Rick made an impact on every person he interacted with. He was a friend, mentor and advisor to everyone he met. Funeral services will be held Friday, September 24, 2021 at 10:00 A.M. at Sugar Land Baptist Church with Pastor Dr. Taylor Sandlin presiding. The family will receive friends Thursday evening September 23, 2021 from 4-7 P.M. in the chapel at Davis Greenlawn Funeral Home. The family suggests that memorials be made to the Alzheimer’s Association in memory of Rick as a tribute to his father. Tributes and words of condolence may be left for the family at www.davisgreenlawnfh.com. Arrangements are under the direction of Davis-Greenlawn Funeral Home, 3900 B.F. Terry Blvd., Rosenberg, Texas 77471, phone: 281-341-8800.

The family of James Richard Chappell created this Life Tributes page to make it easy to share your memories.

Send flowers to the Chappell family.