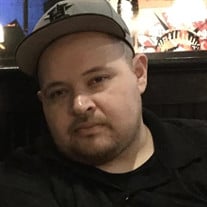 James Baca, fondly known as “Big Baca”, 39, of Richmond, Texas passed away on June 18, 2021 in San Antonio. He was born on December 16, 1981 in Richmond, Texas to Raymond Donald Baca and Aida Vasquez Baca. He was a big Houston Texans fan. This loving father, son, brother, uncle and friend will truly be missed. James is preceded in death by his father, Raymond and his sister-in-law, Melissa Baca. Survivors include his children, James Baca, Jr. and Jaison Ray Baca; mother, Aida; siblings, Tiffany, Bob, Tabitha and Jessica; nieces and nephews, Marisa, Katelyn, Karleigh, Genevieve and Xavier; long-time girlfriend, Jennifer Espinoza; along with extended family and friends. Visitation will be held from 5:00 p.m. – 8:00 p.m., Thursday, June 24, 2021 in the Chapel of Davis-Greenlawn Funeral Home in Rosenberg. The funeral service will be held at 10:00 a.m., Friday, June 25, 2021 in the Chapel of Davis-Greenlawn Funeral Home in Rosenberg with Pastor Mike Hernandez officiating. Burial to follow at Greenlawn Memorial Park in Rosenberg. Tributes and words of condolence may be left for the family at www.davisgreenlawnfh.com. Arrangements are under the direction of Davis-Greenlawn Funeral Home, 3900 B.F. Terry Blvd., Rosenberg, Texas 77471, Phone: 281-341-8800.

The family of James "Big Baca" Baca created this Life Tributes page to make it easy to share your memories.

Send flowers to the Baca family.