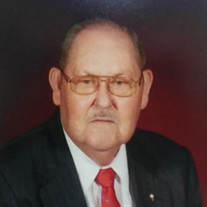 James O. Ainsworth, Sr., 88, of Rosenberg, Texas passed away on January 17, 2021 in Richmond, Texas. He was born on March 24, 1932 in Village, Arkansas to John and Audrey Mae (McWilliams) Ainsworth. He was the eighth child of fourteen children. James grew up on a farm and went to Magnolia High School until the 11th grade. He then came to Texas to visit a brother, found work and remained in Texas. His first job was working for L.D. Ervin Gulf Service Station and then he went on to other jobs through the years retiring from Center Point Energy in 1992. James was a member of Holy Rosary Catholic Church in Rosenberg where he ushered for 40 years, was a 3rd & 4th Degree Knight of Columbus, was on the Altar Society and the St. Francis Guild. He was a convert to the Catholic Religion. James was an avid deer hunter for 24 years, always getting his limit. He loved all sports – especially watching the Houston Astros Baseball Team and the Texans and Cowboys Football Teams. In addition to his parents, James is preceded in death by his son and daughter-in-law, James M. & Gail Ainsworth; and several brothers and sisters. Survivors include his devoted wife, Margaret M. (Gregory) Ainsworth; grandson, Andru Ainsworth; granddaughter, Aimee Fuller and her husband, Kevin; great grandchildren, Joshua, Jacob & Sarah Fuller; several brothers and sisters; along with a host of extended family and friends. Visitation will be held at 9:00 a.m. followed by a rosary at 10:00 a.m. on Tuesday, January 26, 2021 in Marian Hall at the Holy Rosary Catholic Church Campus. The mass will immediately follow at 10:30 a.m. with Fr. Orrin Halepeska officiating. Burial to follow at Greenlawn Memorial Park in Rosenberg. Due to current COVID-19 Restrictions, Marian Hall is limited to 50 people and facial coverings must be worn. For those wishing, please consider making a donation to Holy Rosary Catholic Church, 1416 George Street in Rosenberg, Texas. Words of condolence may be left for the family at www.davisgreenlawnfh.com Arrangements are under the direction of Davis-Greenlawn Funeral Home, 3900 B.F. Terry Blvd., Rosenberg, Texas 77471, Phone: 281-341-8800.

James O. Ainsworth, Sr., 88, of Rosenberg, Texas passed away on January 17, 2021 in Richmond, Texas. He was born on March 24, 1932 in Village, Arkansas to John and Audrey Mae (McWilliams) Ainsworth. He was the eighth child of fourteen children.... View Obituary & Service Information

The family of James O. Ainsworth, Sr. created this Life Tributes page to make it easy to share your memories.