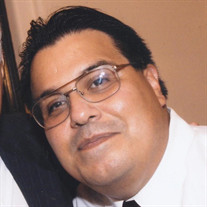 Henry Nieto is now with the Lord. He spent his final days as he lived his life – as a determined, kind and strong man. Henry was a beloved son, brother, nephew, cousin and friend who called the Houston area home. He was unselfish, artistic and smart. He was gifted with an analytical mind that loved complex problem-solving and puzzles that were intimidating to most people. His colleagues say he ruled the roost during lunchroom games. Henry was a skilled nature photographer. He spent hours at his cherished Brazos Bend State Park where his lens captured the spontaneous pursuits of alligators and other wildlife. Every year he traveled to Rockport, TX to immerse himself and his camera in photographing the fickle flight of hummingbirds. He took his parents on countless birding trips along the Texas Gulf Coast and to the red rock beauty of Sedona, AZ. Henry also loved his work in the oil industry that afforded him travel and relationships from around the world. His mind worked on overdrive, calculating and delivering mathematical and computer projections for oil drilling. He tackled complex problems with a strong work ethic, working late into the evening, into the middle of night and weekends. His work created an appreciation for earth’s inner core, energizing his personal passion for rock formations and what one could learn about the moment quartz, crystals and other precious stones were formed billions of years ago. Henry played the acoustic guitar, picking up the instrument at an early age. His mom recalls when he played his first song he asked: “do you know what I played?” She said why yes… it’s “Twinkle, Twinkle Little Star.” He was astonished. Little did he know she had glimpsed at his music sheet. But that confidence booster is what he needed to continue. Henry joined a child mariachi band that went on to have national success, but he left the band to learn the electric guitar. His favorite band… Rush, though he had an eclectic music taste that ran from classic rock, to zydeco, mariachi, Tejano and old school country. As a boy, Henry was a free spirit who would try anything once. He was the first kid to raise his hand to jump off the high diving board during YMCA swimming lessons. When his sister took ballet, he begged his Mom for lessons. The next week wearing a white shirt, black shorts and black ballet slippers… he entered Miss Chelsea’s rehearsal hall. He was the only boy among a sea of 7-year-old girls. He lasted two lessons, or so. Not his cup of tea, after all. Then there was the Boy Scout soap box derby race. He and his Dad built the car to be a powerhouse on the track – capable of handling the steep launch pad and the hard first turn at the end of the den mother’s driveway. Great idea, right? That is until he roared down the incline. Fear may have set in, but he came home a trophy winner. Henry was an altar boy and considered the seminary. He played youth sports… his Dad was often the coach, his Mom a fundraiser and his sister a cheerleader. But of all his accomplishments, Henry’s unselfish generosity is to be celebrated. He was the first person to help someone in need. He gave generously to non-profits, church and his alma mater. He shared his success with his immediate and large extended family and friends. He was devoted to his parents, and them to him. He made sure they were never in need. He loved them very much. Henry had a wonderful life who lived it as taught by his family and his Catholic faith. Henry is now with the Lord, reunited with his mother Mary, and other relatives who’ve gone before him. He is survived by his father Henry, sister Rebecca, brother-in-law Alfred, along with aunts, uncles, and cousins. A walk-through visitation will be held at Davis-Greenlawn Funeral Chapels and Cemeteries Thursday, January 7th between 5 and 7:30pm. A private burial at the cemetery is January 8th. Davis Greenlawn is located at 3900 B.F. Terry Blvd, Rosenberg, TX 77471. Ph: 281-341-8800. You are welcome to send flowers to Davis Greenlawn.

Henry Nieto is now with the Lord. He spent his final days as he lived his life &#8211; as a determined, kind and strong man. Henry was a beloved son, brother, nephew, cousin and friend who called the Houston area home. He was unselfish,... View Obituary & Service Information

The family of Henry Nieto created this Life Tributes page to make it easy to share your memories.

Henry Nieto is now with the Lord. He spent his final days as...

Send flowers to the Nieto family.